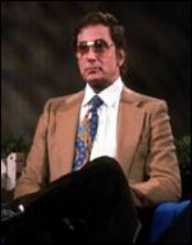 Robert Charles Joseph Edward Sabatini, also known as `Bob Guccione’ was born on 17th December 1930, in Brooklyn, New York. His parents were Antony and Nina. Antony worked as an accountant while Nina was a housewife. Guccione thought of being a priest but later rejected the idea.

Bob Guccione went to Blair Academy located in Blairstown in New Jersey for his high school studies. During his teen years, he got married to Lillian Becker. Together, they had a daughter named Tonia. The marriage did not last for long, and Bob soon left for Europe to pursue painting aspirations. He then met a lady named Muriel, whom he married and settled in London. The couple had four children, namely Tony, Nicky, Robert Jr. and Nina.

Bob began working as a manager for a chain of Laundromats. He was later employed as a cartoonist with the London American and American weekly newspaper. Also, he created cartoons for a greeting card company named Box Cards.

Bob Guccione began his publishing work with Penthouse in 1965, working in North America and England. At the time, he faced stiff completion from Hugh Hefner’s Playboy. As a result, he modified his magazine to have a more sensitive content with great investigative articles about government scandals and cover-ups. These materials were made possible with the likes of Seymour Hersh, Craig S. Carpel, and Earnest Volkmann, who were great writers and often came up with great articles on scandals and corruption at the prime levels of the government.

During the 1960’s, the rival magazine was widely criticized by feminists associations, who claimed it only supported women’s freedom concerning sexual relationships. Contrary to Playboy who often covered sports extensively, Bob Guccione's penthouse often focused on the art world. At the time, Guccione did not have enough resources yet and was personally responsible for photography of the models.

Despite lack of professional knowledge in photography, Bob Guccione came up with a diffused, soft focus look, courtesy of his painting knowledge. The creative look then became the trademark of the magazine’s pictures.

In the course of time, the magazine became more and more successful. Bob Guccione then adopted a life of luxury. He bought a home in Manhattan, which is believed to be the largest private home in the region. During the 1970s, there was full spread sexual revolution. However, Guccione’s mansion remained sedated contrary to Hugh Hefner’s who often hosted wild parties. Soon the Penthouse magazines pictorials displayed more sexually explicit content about other male magazines at the time. In the successive years, most restrictions on the pornographic material were abandoned as a result of various court rulings, and there was a more liberated sexual attitude.

The magazine featured a lot of unauthorized photos of celebrities, i.e., Vanessa Lynn Williams and Madonna. In Williams’s case, it led to her resignation as Miss America in 1984. The magazine published a lot of such content and event advanced to fetish content during the 1990’s.

Bob Guccione then began making substantial financial investments. In the 1970’s he invested about $45 million in the construction of Huladovo Palace hotel in Yugoslavia, which was opened in 1972. The hotel was however declared bankrupt the following year. In 1976, he used his finances to invest in famous pornography film Caligula and later started the Viva, longevity and Omni magazines.

Bob Guccione married four times during his lifetime. First, he got married to Lilyanne Becker then Muriel Hudson in 1966, after which they separated in 1979. He later married a long time girlfriend from South Africa named Kathy Keeton in 1988. Their marriage ended in 1997 when she died as a result of surgery complications. Bob later married Dawn Warren in 2006, after a long engagement. The couple remained together until his death.

Bob Guccione lived in an expensive mansion in Manhattan and was constructed by artisans sourced from Italy and France. The villa is of excellent artistic impression, with the picture of him and his wife carved near the entrance. It is very luxurious with about 30 rooms and is believed to cost about $5 per year to maintain. However, Guccione was later faced with bankruptcy and was forced to sell most of his property.