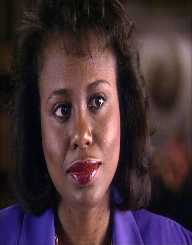 American law professor, activist and author Anita Hill was on 30 July 1956 in Lone Tree, Oklahoma. Her parents had a farm, and she was one of 13 children born to the couple. Hill graduated from Morris High School with distinction. Hill then obtained a BA in Psychology (1977) from Oklahoma State University and a law degree from Yale Law School (1980)

In 1991, when Clarence Thomas was nominated by President Bush for a seat on the United States Supreme Court, Hill appeared before a Senate Committee. Hill claimed that Thomas had sexually harassed her during her time working for him in the Office of Civil Rights. Although Thomas went on to be appointed to the Supreme Court, her testimony brought Hill to the attention of the nation as equal rights and anti-discrimination activist. Her appearance resulted in opposing forces organizing to have Hill removed from the Oklahoma Law School (1991-1996). In 1993 David Brock published a book, The Real Anita Hill, which questioned her motives for appearing before the Senate. Jill Abramson and Jane Mayer then published Strange Justice: The Selling of Clarence Thomas (1994) which supported Hill’s side of the debate.

Anita Hill took a leave of absence from her post at Oklahoma University to concentrate on writing a book giving her side of the story (1994), and she left the university in 1996 to take up a temporary position at UCLA in Berkeley, California. In 1997 Hill published her book, Speaking Truth to Power and the following year began teaching at Brandeis University. Her latest book is Reimagining Equality: Stories of Gender, Race and Finding Home (2011).

Awards Anita Hill has been given include honorary degrees from Simmons College and Dillard University (2001),  the Alphonse Fletcher Sr. Fellowship Award (2005) and the Ford Hall Forum First Amendment Award (2008). Hill was also presented with the UC Merced Alice and Clifford Spendlove Prize in Social Justice, Diplomacy and Tolerance (2016).