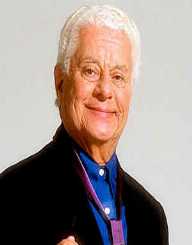 Jazz musician, producer, and songwriter Tito Puente was born Ernesto Antonio Puente Jr. New York City on the 20 April 1923 to Puerto Rican migrants. As a child, he showed a flair for music and quickly picked up playing a number of instruments including piano and saxophone.

He was a pupil at Central Commercial High School but dropped out at 16 to work full-time as a musician. Later, after his discharge from the US Navy, Tito Puente studied music at the Juilliard School of Music in New York. He was able to attend Juilliard because of the GI Bill, the Servicemen’s Readjustment Act of 1944 provided help for World War II veterans by way of educational grants, low-interest mortgages and other benefits.

During the 1930s Tito Puente formed a duo with his sister, and they had a song and dance routine. Later in the early 1940s, he played drums in the Machito Orchestra, Afro-Cuban jazz and Latino band which was experimenting with a fusion of the two genres.

Once he had graduated from Juilliard, Puente formed the Tito Puente Orchestra where his Afro-Cuban-Latin style arrangements and compositions developed into his own unique style. The Orchestra played at various venues including the Palladium Ballroom and nightclubs. Sometimes playing over 300 gigs a year, he earned the nickname the King of Mambo.

Tito Puente found international success with his album Dance Mania (1958). His song Oye Como Va (1963) was later recorded by artists such as Carlos Santana and Julio Iglesias. Other songs include  Babarabatiri and Ran Kan Kan. Throughout the following decades, Puente continued with his vibrant Afro-Cuban and Latin jazz composition and experimentation music. In 1992 Puente played himself in the film adaptation of Oscar Hijuelos’ book The Mambo Kings Play Songs of Love. He also appeared in guest roles on television including the Simpsons.

Tito Puente received many awards and acknowledgments during the course of his career and posthumously. These awards included being handed the keys to the City of New York in 1969, being inducted into the National Congressional Record in 1992 and being awarded the James Smithson Bicentennial Medal from the Smithsonian Institute in 1993. In 1995 he was presented with the Billboard Latin Music Lifetime Achievement Award. A unique honor was when the Puerto Rican government dedicated a special session in his honor, at which he performed. Other acknowledgments included 12 Grammy nominations. He won five Grammy Awards and recorded over 120 albums.

Tito Puente was married to Margaret Asencio from 1947 until his death in 1977.  He had three children Tito, Audrey, and Richard. Tito Puente died in 2000 from a heart attack.

In 1979 Tito Puente funded a scholarship for Latin percussionists at the Juilliard School in New York City.

Before his death in 1977, Puente had gained legendary status as a musician, songwriter, and composer referred to by music aficionados as the King of Latin Jazz.

In Union City, New Jersey there is a star honoring him on the Walk of Fame at Celia Cruz Park and in Spanish Harlem, New York. East 110th Street was renamed Tito Puente Way in 2000.