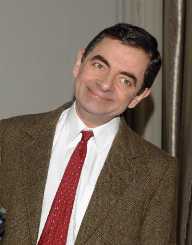 Many people know him as ‘Mr. Bean’. The funny thing is that he has an outside life rather than acting, dancing, and screenwriting. Oh! He doesn’t murmur he talks perfectly and flawlessly. Other than his famous role, he began with comedy films such as The Observer and Never Say Again in 1983. He is a witty man who is destined to personify anything no matter the grandee. I can’t deny that he has a million fans out there, I included.

On January 6, 1955, Rowan Sebastian Atkinson was born in Consett, Newcastle in England. His father was called Eric Atkinson while his mother was certified as Ella Man. He is the youngest child of four siblings. Rowan was raised in an Anglican background. He joined Durham Choristers School, and finally, he pursued Electrical Engineering at Newcastle University. He continued his studies at the Queens College in Oxford. Here he met Richard Curtis, a screenwriter with whom he masterminded sketches and writing for the Edinburgh Festival Fringe.

Rowan Atkinson began his acting career when he first appeared in a sitcom show titled ‘The Atkinson People’ in 1978.The following year, he did an infamous sitcom called Canned Laughter. He was then seen in a television series that was sketched as Not the Nine O’ Clock News. Here he partnered with Pamela Stephenson and Chris Langham. Rowan has earned acclaimed success, all thanks to his comedic character.

In 1983 Atkinson continued to aim higher, he was seen in an old-fashioned kind of comedy titled ‘The Black Adder’ show. After a short pause, he regained his success by co-writing the same sitcom with an infamous film director, Richard Curtis. The same year, Atkinson created his motion pictures with James Bond supporting role in the ‘Never Say Never Again.' Similarly, he cast another film titled ‘Dead on Time.' From 1987 to 1989 Rowan had a chance to perform at the Just for Laughs festival in Montreal. He was later seen at 'The Tall Guy and The Appointment of Dennis Jennings' film.

In the mid of 1990, he took Mr. Bean role in a show that had the same title ‘Mr. Bean’. Little did he know that the series was his path to success. It was the only show that gave him the acclaim of being the most envied British actor-comedian of all time. He later followed it up with ‘The Witches’ film that he continued to further his recognition to the brim. He followed it up with the voicing of the Lion King Disney show.

From 2001 to 2003 Rowan appeared in Rat Race film, Scooby-Doo, Love Actually and Johnny English. Afterward, he was seen in a crime comedy titled ‘Keeping Mum.' In 2007 he released Mr. Bean’s Holiday, and after two years he appeared in a musical theater role named Oliver. In the mid of 2011 Atkinson boldly overtook other thespians by playing ‘John English Reborn’ film that received positive acclaims.

In 2012 Rowan Atkinson told the public that he wouldn't appear in any other Mr. Bean’s role. He later took an apparent role in the ‘Quartermaine's Terms’ in London.

In 2013 Atkinson was honored with the ‘Commander of the Order of the British Empire’ title. In the mid of 1990, Rowan married Sunetra Sastry, and they were blessed with two children. Aside from his comic role, he loves to race as well as operating grandeur autos such as Aston Martin and Audi A8. Also, Rowan has written over ten copies of car magazines. In that case, Rowan was once invited to two television auto shows titled Full Throttle and Top Gear. Rowan happened to visit Kenya for a short vacation when his private pilot fainted while on air. Fortunately, he somehow managed to maneuver till his pilot rejoined him after regaining consciousness.