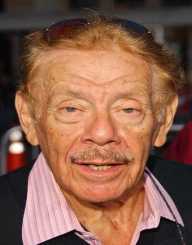 Jerry Stiller is an American actor known for his comedy antics with his wife, Anne Meara. Stiller is famous for being cast in NBC’s Seinfeld and CBS’ The Kings of Queens. His son, Ben Stiller, is also a famous comedian and his daughter Amy Stiller is also involved in the show business. Besides being a television and film actor, Stiller also serves as an animal rights activist.

Stiller and his wife Anne Meara earned a joint star in 2007 on the Hollywood Walk of Fame.

Born as the eldest son of William and Bella Stiller on June 8, 1971, his full name is Gerald Isaac Stiller. He was a native of Brooklyn, New York and came from a family of Jews.

He attended Seward Park High School and later enlisted at the forces to serve during World War II. After the completion of his service, he enrolled at Syracuse University wherein he attained a bachelor’s degree in Speech and Drama upon graduation in 1950. He was also involved in Phoenix Theater’s 1953 production of Coriolanus with Jack Klugman and Gene Saks.

Jerry Stiller is prominently stapled as the typical cranky father thanks to his role as Frank Constanza in NBC’s early 1990 comedy series Seinfeld. Seinfeld tells the story of the daily life of Jerry Seinfeld and his friends. The series ran from 1989 to 1998, covering a span of nine seasons.

After wrapping up Seinfeld, Jerry Stiller immediately jumped into the series The Kings of Queens. He once again reprised the role of a surly father-in-law named Arthur Spooner to Kevin James’ character, Doug Heffernan. Stiller originally planned to retire after Seinfeld, but James convinced him to take the role. The series ran from September 21, 1998, until May 14, 2007. The series covered a span of nine seasons, the same as Seinfeld’s.

Besides being involved in television series, he also did films of which notable among these are Hairspray and The Taking of Pelham One Two Three. He appeared in two of his son’s comedic films; the first in Zoolander back in 2001 and The Heartbreak Kid in 2007.

A Coffee Date Turned Into A Lifetime Commitment

Jerry Stiller met his wife Anne Meara in a casting agent’s office. At the time, Anne was distraught at the agent’s attitude that to comfort her, Stiller bought her coffee, the only thing he could afford her at the time. Since then, the two have been together and for 60 years until her death on October 17, 2014.

Before Jerry Stiller became a regular on television series, Stiller along with Anne formed a comedic duo that regularly performed on clubs and later on television. They made an odd pair with Stiller being a man of short stature from a Jewish family and Anne being a tall Irish-Catholic woman.

Jerry Stiller wrote a memoir that was published in 2000 entitled Married to Laughter: A Love Story Featuring Anne Meara inspired by the love from his wife.