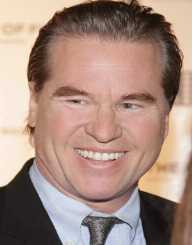 American actor Val Kilmer was born to Gladys Ekstedt and Eugene Kilmer in Los Angeles, California on the 31 December 1959. The couple had three sons: Wesley, Val, and Mark. When Kilmer was a teenager, just before his enrolment at Juilliard, his older brother Wesley, who had epilepsy, drowned.

Val Kilmer became interested in acting during his high school years Chatsworth High School where Kevin Spacey was a fellow pupil. He then enrolled at Hollywood Professional School where he studied before being accepted into the Juilliard School in New York to study drama.

Initially, a stage actor his film debut was in Top Secret (1984). The film was a spoof on spy movies, and Kilmer played a rock and roll star, singing and acting in the role.

Val Kilmer next appeared in Real Genius (1985) and was then given the role in the film Top Gun (1986) with Tom Cruise. The film was a huge hit and made Kilmer’s name as a Hollywood actor. He had another big hit in 1991 playing musician Jim Morrison in The Doors, an Oliver Stone production. Other films include True Romance (1993) where he played Elvis Presley and Tombstone (1993). Val Kilmer was then chosen to play the role of Bruce Wayne aka Batman in Batman Forever (1985).

In 1988 Val Kilmer met British actress Joanne Whalley when the filmed Willow (1988). They married shortly afterward and had two children, a daughter Mercedes (b.1991) and a son Jack (b.1995). The couple divorced in 1996. For many years Val Kilmer lived on a ranch in New México, which he sold in 2011.

In December 2017, it was reported that Val Kilmer had been fighting a battle with throat cancer for two years.