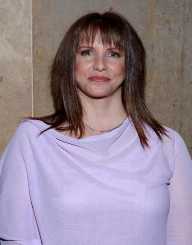 Comedian and actor Laraine Newman was born on 2 March 1952 in Los Angeles, California. She has three siblings, one of whom, Paul, is her twin.

Laraine Newman graduated from Beverly Hills High School in 1970. She also studied mime in France for a year.
Newman’s career began in the early 1970s when she was a founding member of the comedy the original members of the hit show Saturday Night Live (1975-1980).

Having established herself in the industry, Laraine Newman has continued working in voice animation, acting, writing and editing. As a writer, she has contributed to many publications including The Jewish Journal, Huffington Post, and Esquire.

She is a regular on Celebrity Autobiography and is on the board of Sketchiest, a San Francisco comedy festival and regularly appears at the festival. Films she has acted in include Stardust Memories, Girls Season 38, Loathing In Las Vegas, Problem Child 2 and Invaders From Mars. Television roles have included Curb Your Enthusiasm, The Birthday Boys, Comedy Bang Bang and Trophy Wife.

Recent awards including a 2016 Annie Outstanding Achievement in Voice Acting in an Animated TV/Broadcast Production for Down of the Croods (2015). Laraine Newman also received a 2017 nomination for BTVA Voice Acting Award Voice Actress of the Year for Milo Murphy’s Law (2016).

Laraine Newman has been married to Chad Einbinder since the early 1990s, and the couple has two children.