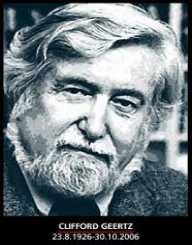 Clifford James Geertz was born on 23rd August 1926, in San Francisco, California, in the United States.

After the military, Geertz studied at Antioch College. In 1950, Geertz graduated with a degree in philosophy. He then went to Harvard University, and he graduated with his Ph.D. in 1956.

While at Harvard, Geertz studied in the Department of Social Relations. He trained to be an anthropologist.

The Ford Foundation and MIT funded Geertz's first long term fieldwork which lasted two and a half years. Due to this, he was based in Java, Indonesia, for that time.

Clifford Geertz held several teaching jobs, but in 1960, he joined the University of Chicago in their anthropology department. He continued to research Indonesia, concentrating on Java and Bali. As a result, Geertz wrote three books between 1960 and 1963 on Indonesia.

He then turned his attention to Morocco. His research produced several more books over the next few years, including one that compared Morocco with Indonesia.

In 1970, Geertz joined the faculty at the Institute for Advanced Study in Princeton, New Jersey. He became a professor of social science, and he served in the position until 2000. Geertz then became an emeritus professor.

Clifford Geertz's best-known work was The Interpretation of Cultures, published in 1973. It was a collection of essays that were written during the 1960s, and it established Geertz as an anthropological theorist.

For just over the next two decades, Geertz wrote many essays and theoretical works.

Clifford Geertz worked on the anthropological streams of culture and ethnography. He placed a significant emphasis on symbolic anthropology.

His research had a significant influence across various academic fields in the 20th century. These include anthropologists, ecologists, historians, and geographers.

Between 1957 and 2006, Geertz published over 50 influential books and essays.

In 1987, Clifford Geertz received the Award for Distinguished Contributions to Asian Studies. The Association for Asian Studies provided the award.

Geertz also received Honorary Doctorates over the years from more than 15 different universities.

In 1948, Clifford Geertz married Hildred Geertz, who was an anthropologist. They divorced in 1981.

His second marriage was to Karen Blu in 1987. Blu was also an anthropologist, and the pair were still together at the time of Geertz's death.

He had two children.