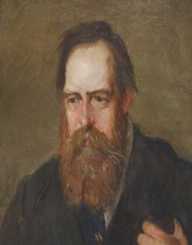 Albert Pinkham Ryder was born on March 19, 1847. He was an American painter, specializing in seascapes. Ryder practiced imaginative painting which took time to produce. He was obsessed with sea and believed that human is helpless when confronted by forces of nature. Furthermore, Ryder had a unique style of not including nonessential information in his works. He concentrated his painting on generalized forms and color masses. Ryder brought the mood of his paintings by infusing a thick yellow line. He died on March 28, 1917, poor and neglected.

Albert Ryder was born on March 19, 1847, in New Bedford, Massachusetts. He was the youngest of three siblings. The bustling of the New Bedford port may have influenced Ryder connections with the sea. This is where he grew up and started his landscape painting career. The modern American and European art did not affect his earlier career as he mostly worked alone.

He initially trained in the art with painter William Edgar Marshall from 1870 to1873.  Later Ryder joined National Academy of Design (1874-1875) to study art. In his trips to Europe, he attended art schools, consequently sharpening his skills.

For Albert Ryder breakthrough happened in the 1880s and 1890s. Also, in 1880s Ryder often exhibited his work and it was received well. During the same period, his work shifted from pastoral landscapes to mystery subjects. Painter Robert Newman had a lot of influence on his later works.

From 1900 until his death, his career diminished significantly. Consequently, he put efforts in re-working on his existing paintings. His fame started to grow when he had already lost interest in art. Ryder artwork continued to be collected and exhibited widely.

Albert Ryder painted less than 200 works and almost all of them before 1900. Ryder hardly signed and never dated his paintings. As time went on, most of his work was damaged. Therefore, much of his paintings look different from the original as a result of reworking.