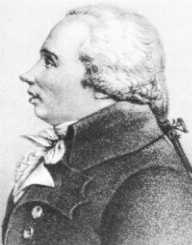 Adrien Marie Legendre was born on September 18, 1752. He was a French mathematician. He contributed a lot to the field of mathematics. He researched areas such as elliptic functions, number theory, calculus and gravitational attractions among so many other branches of mathematics. He developed the least squares method and also gave the concept of Legendre transformation.

In 1775, Adrien Marie Legendre became a faculty for mathematics at the Ecole Militaire, Paris alongside Pierre Simon Laplace. In 1783, he became a member of the French Academy of Sciences after his research on gravitational attraction of elliptic bodies. In 1786, he came up with his most famous work ‘Treatise on Elliptic Functions’. In the same year, he worked on calculus majoring mostly on the procedures of Maxima and Minima.

In 1787, Adrien Marie Legendre worked in a Paris Observatory team. The team worked along with Royal Greenwich Observatory for studying geodetic measurements. He contributed to mathematics by developing the metric system, the standard metre and logarithmic and trigonometric tables. In 1799, he became an examiner for mathematics for artillery graduates at Ecole Militaire. He was later appointed in the mathematics section of the French Academy of Sciences which was closed during the French Revolution and reopened in 1795.

In 1806, Adrien Marie Legendre published the book titled ‘New Methods for the Determination of Comet Orbits’ which was about the methodology of least squares. In 1830, he published ‘Theorie des nombres’ which was all about number theory and the law of quadratic reciprocity.

In 1793, Adrien Marie Legendre married Marguerite Claudine. He died on January 10, 1833, after a long illness in Paris, France. He died at the age of eighty one.