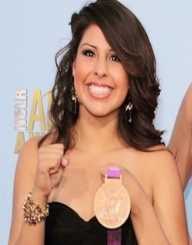 Marlen Esparza was born 29th July 1989, to David and Carmen Esparza. She was born in Houston, Texas, in the United States. She has two siblings, a brother, and a sister.

Esparza studied at Pasadena High School, and she graduated in 2007. She was already boxing during her high school years, and in 2006 she came third in the Women’s World Boxing Championship.

In 2012, Marlen Esparza qualified for the Olympics. It was the first year that women’s boxing had been included, and Esparza won a bronze medal. In 2014 she won gold at the AIBA Women’s World Boxing Championships, and in 2016 she won bronze.

In addition to her boxing career, Esparza has modelled for CoverGirl cosmetics and advertised Coca-Cola. She has also been involved with PETA, the animal rights activist group.

Marlen Esparza went pro in December 2016 when she signed on with Golden Boy Promotions. She won her first professional fight in March 2017. At the time of writing, Esparza has five fights to her name and has won all five – one by knockout, and four by decision.

Marlen Esparza was awarded Houston Fighter of the Year for five consecutive years, from 2010 to 2014.