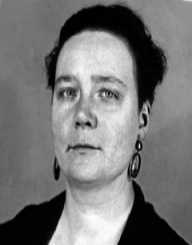 English crime writer, translator, poet, and playwright Dorothy L. Sayers was born on the 13 June 1893 in Witham, Essex, England to Henry Sayers, a chaplain at Christ Church Cathedral School in Oxford and Helen Mary Leigh. She was raised in the village of Bluntisham-cum-Earith in Huntingdonshire where her father was the rector.

Dorothy L. Sayers was homeschooled before being sent to Godolphin School, a boarding school in Salisbury. Sayers then won a scholarship to Oxford University where she was studied English literature at Somerville College (1912-1915). She obtained a masters degree in 1920, becoming one of the first women to receive a degree from Oxford University.

Dorothy L. Sayers began her writing careers as a poet and her first book of poetry, Op.1 was published in 1916, followed by her second collection, Catholic Tales and Christian Songs (1918). She also worked as a copywriter at S.H. Benson’s, an advertising agency in London (1922-1931).

Sayers also collaborated on four other novels, wrote radio serial stories and did six translations including Dane’s Divine Comedy and the Song of Roland from medieval French. As a playwright, she wrote The Zeal of Thy House for the Canterbury Festival plus six others plays.