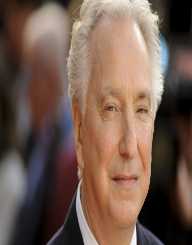 Alan Rickman was born on February, 21st, 1946. His birthplace was in West London, England. During his youth years, Rickman had shown a strong liking for performing arts. In 1978, he honed his skills with the joining of Royal Shakespeare Company. His on-stage performance in Les Liaisons Dangereuses- 1988 earned him a Tony Award nomination. In his film career, he was highly acclaimed for the lead role he played in Die Hard -1988. He is also to be remembered for the Severus Snape character in the famed Harry Potter film series. Rickman died at the age of 69 in 2016.

At the time of his birth on February 21st, 1946, Alan Rickman was given the name Alan Sidney Patrick Rickman. He was the son of Bernard William Rickman and Margaret Doreen Rose. His father worked as a painter and a factory worker. His mother was merely a housewife. Rickman was the second born son in a family of four siblings. He had to be raised by his mother after his father’s death when he was only eight years old.

Rickman took his early lessons in Derwentwater Primary School. During this time at the institution, he was respected for his remarkable painting and calligraphy skills. He was also actively involved in drama while studying at Latymer Upper School. Soon, he enrolled with the Chelsea College of Art and Design before later joining Royal College of Art. Immediately after graduating from the college, he partnered with some of his friends to launch as graphic design business. Three years down the line, Rickman took a different career path as he ventured into acting. This prompted him to audition with Royal Academy of Dramatic Art and enrolled with the institution for two years.

In 1978, Alan Rickman continued with his acting at the Royal Shakespeare Company making appearances in Love's Labour's Lost, Romeo and Juliet, The Tempest and other stage performances. In 1985, things turned out good for him as he played the lead role in Les Liaisons Dangereuses. Howard Davies has directed this production. The production was later moved to Broadway in 1987, and as a result, Rickman was considered as a nominee for the Tony Award. In addition to this, he was also part of the nominees for Drama Desk Award.

It did not take time before Rickman found himself in the film industry. In 1988, he was cast as Hans Gruber in the hit film Die Hard of 1988. Two years later, he landed another villainous role in Quigley Down Under – 1990. A year later, he featured in three other films Truly, Madly, Deeply, Close My Eyes and Robin Hood: Prince of Thieves. During the 90s, he featured in several films, but they did not earn him much of recognition. Some of the films that he featured in during this period are Bob Roberts -1992, Sense and Sensibility- 1995, Dogma -1999, and Help! I'm a Fish -2000.
In 2001, he landed a big role in Harry Potter movie series. He was to play the character of Severus Snape. This was a role that got him to become a national star as he reprised his role in 8 other Harry Potter films.

Alan Rickman secretly tied the knot with Rima Horton in 2012.

Rickman passed away on January 14th, 2016. He was 69 years old when he died. His cause of death was cancer.