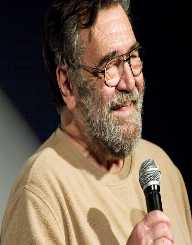 Ralph Bakshi is an American animated and live-action film director. Born on October 29, 1938, His family was a Palestine migrant who settled in the United States. Aside from directing, he is also a scriptwriter and production and has been involved in many other television projects. Ralph Bakshi with his innovations came out with independent and adult-oriented productions as a rival approach to the mainstream animation film.

Ralph Bakshi in 1972 released his debut feature film, Fritz the Cat and that film has since become the most successful independent animated film of all time. It also became the first animated film to be X-rated by the Motion Picture Association of America. Some of his famous films are The Lords of the Ring, Fire, and Ice, AdventureWizards, and American Pop. His Tv series also includes Mighty Mouse: The New. Bakshi and two others founded The Bakshi School of Animation in 2003 where he taught animation. He has received awards like the GoldenGryphon in 1980 for The Lord of the Ring, Annie Award, and Maverick Tribute Awards. He has also done some works in painting and fine arts.

Ralph Bakshi was born on October 29, 1938, to a Jewish family in Haifa, Mandatory Palestine. A year after his birth, his family fled from their country to New York to seek for a safe haven because of the World War II. He then grew up in Brownsville, Brooklyn with his family.

Ralph Bakshi was very interested in comic books and even searched through trash bins to find disposed ones to read. In the US, Bakshi’s family had to make a living to make life comfortable for them, so his father moved traveled to Washington, D.C to find a job. This necessitated him to move the other family to Foggy Botton, segregated black neighborhood. Though he was not black but white, Ralph Bakshi had to be lived with them and involve himself in all activities in the black community. Due to the segregation, it was almost impossible for him to school in that community. However, the available white school was miles away.

He was admitted to the black school, but circumstances like the black students being dissatisfied of his presence in the school so had to be removed from his class. The family later moved back to Brownsville. He then attended Thomas Jefferson High School and was later transferred to the Manhattan School of Industrial Art. That was when he found his real passion and talent and graduated from the school with an award in cartooning in 1956. Bakshi had previously engaged in boxing.

Ralph Bakshi completed high school at age 18and upon the recommendation of a friend, Anzilotti; he was hired by the Terrytoons cartoon studio as a cel polisher. His duty was to remove dirt and dust from animation cels. He was soon promoted to a cel painter where he worked diligently with the aspiration to become an animator.

He was given some animation task as a test by Gene Deitch, the studio manager. Though Deitch was not convinced Ralph Bakshi was up to the task, so Ralph Bakshi continued with comic strips like Bonefoot and Fudge and Junktown which focused on idiot with an agenda and misfit technology and discarded ideals respectively. He soon joined the animation team in the studio and later became a director at age 25.

Ralph Bakshi new position came with new responsibilities and his first task at the position was the series Sad Cat. Ralph Bakshi did not really enjoy this position because he was not able to work as he would like. His quest to leave Terrytoons became heightened when he was denied the creative director role of The Mighty Heroes. Ralph Bakshi had pitched The Mighty Heroes series after several proposals of Terrytoons to CBS was declined. After describing the series, CBS gave the greenlight to the show and demanded that Ralph Bakshi given the creative director role, however, this didn’t happen. So even though he was given a pay rise,he was dissatisfied and was also unhappy the final outcome of the series.

He finally left Terrytoons and was hired by Paramount Pictures to replace fired Shamus Culhane, head of the animation department. At Paramount, he hired other hands and worked on shorts like The Fuzz, Marvin Digs, Mini-Squirts and Mouse Trek. However, Marvin Gigs had very disappointing reviews from critics. His contract with Paramount was cancelled after eight months of service in 1967. This was because the firm had closed its animation division. Bakshi with no job now decided to come out with his own studio, Bakshi Production in 1968 in the Garment District of Manhattan. His first work at the studio was Rocket Robin Hood and later Spiderman television series. The following year, he produced commercials for companies like Coco-Cola and Max. His other productions at the time include Fritz the Cat, Heavy Traffic, Coonskin, Hey Good Lookin, Wizards and The Lord of the Rings

Ralph Bakshi retired from animation and took to the classroom in 2000. He taught at the School of Visual Arts in New York and the following year did some painting works for the film Vanilla of Cameron Crowe. He worked on other projects and with firms like Sci-Fi Channel. In 2002 he New York for New Mexico with his family to continue his painting works. There, he worked on Last Days for Coney Island films and in 2008, he worked with Main Street Pictures to produce the sequel of Wizards. He also produced  the short film series Bakshi Blues in 2012.

Ralph Bakshi received honors like the Maverick Tribute Award, 2003, that year, his films Fire and Ice, Fritz the Cat,  and The Lord of the Rings made it onto the Top 100 Animated Features of All Time compiled by Online Film Critics Society.  In 2005, he held a three-day American Cinematheque retrospective at the Grauman Egyptian Theater, Hollywood and the Aero Theatre.

Ralph Bakshi married Elaine when he was 21. The couple had a son Mark but divorced later because she was not happy about Bakshi’s long hour work.  He later married Lizin August 1968 and had their first child Preston in 1970.