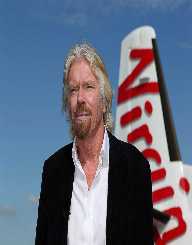 Sir Richard Charles Nicholas Branson was born on July 18th, 1950. His birthplace was in Blackheath, London. His academic life was nothing but a struggle, and this led to Branson quitting while he was just 16 years old. He is an English business mogul whose entrepreneurial projects initially began in the music industry before shifting direction to other lucrative sectors. With time, he made himself a billionaire. His leading business group known as Virgin Group has more than 200 companies.

Richard Branson is the eldest son of Eve Branson and Edward James Branson. His mother previously worked as an air hostess. On the other hand, his father was a barrister. Branson has two younger siblings. He went to prep school at Scaitcliffe School after which he moved to Stowe School when he was 13 years old. Branson was academically challenged and therefore found a hard time connecting with his classmates. At the age of 16, he decided to call it quits as he realized that he was at the wrong place.

The Record business was the first thing that he could stumble on for the early part of his career. During this time, Richard Branson was running Student Magazine. He did this from a local church. The magazine content featured interviews with famous celebrities with the likes of R. D. Laing and Mike Jagger. He also concentrated on advertising hit records on this magazine which contributed to the overnight success of his new business.

With the intention of funding his magazine business, Branson had a brilliant idea of coming up with a mail-order record company. He would later name this company “Virgin.” The name came from Branson’s early employers who referred to them as Virgins considering the fact that they were new in business. His new business performed averagely, but this was just what Branson needed to expand further. He went ahead and opened another record shop and positioned it in Oxford Street, London. The new shop was a major success to the extent that Branson decided against establishing his recording studio. This was in 1972.

A year later after establishing his recording studio, his first artist came up, Mike Oldfield. Oldfield recorded a single song called "Tubular Bells." Branson’s team helped in making the song creative and appealing to the audience. Soon after releasing this song, it was an instant success topping the UK charts and later becoming the best seller. Other groups and individuals wanted to be part of Virgin’s success, and they signed with them. Several artists lined up in the new recording studio were guys like Genesis, Rolling Stones, and the Culture Club. With talented groups working with Virgin, the recording studio rose its ranks to become a highly recognized recording company all over the world.

Richard Branson later diversified in his entrepreneurial skills by establishing other new business ventures. In 1980, he included Voyager Group, a travel company into Virgin Group. Four years later, Virgin Atlantic airline came in. Regardless of the successful career that Branson had amassed to this time, the Virgin Group faced financial challenges in 1992. This resulted in the group being sold for $1 billion to THORN EMI.

Shortly after selling his company, Branson woke up again and established V2 recording company in 1996. The new organization signed deals with artists such as Powder Finger and Tom Jones. Years later, Branson amazed the world yet again by establishing a space tourism company called Virgin Galactic. He was to do this with the help of the co-founder of Microsoft Paul Allen and aeronautical engineer, Burt Rutan.

In 1972, Richard Branson married his first wife, Kristen Tomassi. The couple divorced in 1979. In 1989, he remarried again this time to Joan Templeman whom they are still together to date. They have two siblings, Holly, their daughter and their son Sam.