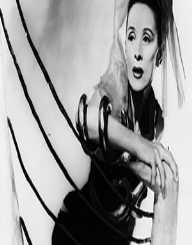 Martha Graham was an American dancer and choreographer who is best known for the Graham method and efficiently shaping modern dance.

Martha Graham was born on 11 May 1894 in Pittsburgh, Pennsylvania. Her father, George Graham, worked as a psychiatrist. Her family was economically comfortable and strict Presbyterians. The family later moved to Santa Barbara, California and it was here that Graham witnessed her first dance performance.

Immediately smitten by the art, Graham began to train at the Denishawn School of Dancing and Related Arts. In 1922 Graham appeared in a short silent film, it is one of the few instances of Graham on film as she felt dance should be only experienced live.

Martha Graham began work at the Eastman School of Music in 1925. Here she produced a colour film, Flute of Krishna, which featured students of the school. The following year, Graham established the Martha Graham Center of Contemporary Dance. Graham made her independent stage debut at the 48th Street Theatre in Manhattan in 1926. Graham developed a technique that focused on breathing and contraction and release.

Her collaboration with Soichi Sunami created many of the iconic images of modern dance. Martha Graham used dance to convey an opinion on the events of the day. Her shows dealt with subjects such as the 1929 Wall Street Crash and the Spanish Civil War. By the 1930s Graham was world-renowned; she was invited to perform at the International Arts Festival, a Nazi event that ran alongside the 1936 Olympics but declined.

Martha Graham became the first dancer to perform at the White House when the Franklin Delano Roosevelt government invited her. In 1958, Graham completed and premiered her only full-length ballet production, Clytemnestra. Clytemnestra is considered Graham’s masterpiece and enjoyed a run on Broadway. Graham performed into her 70s. Her last live performance came in 1970 when at the age of 76 she appeared in a Cortege of Eagles.

Martha Graham created one hundred and eighty-one choreographies during her illustrious and lengthy career. Her retirement from dance had a severely negative impact on Graham’s health. Watching other dancers perform her works led to Graham suffering from depression, and she began drinking heavily. Graham was hospitalised and near death following her retirement. However, she recovered and in 1972 began choreographing again and returned to an active role in her dance school. She continued to work until her death at age 96.

Graham’s dance company, The Martha Graham Dance Company, is the oldest dance company in America. Graham was elected as a Fellow of the American Academy of Arts and Science in 1957. In 1976, she received the Presidential Medal of Freedom. Graham was nicknamed the Picasso of dance in recognition for her influence on twentieth-century dance.

Martha Graham married Eric Hawkins in 1948. Hawkins had been the first male dancer to join her company in 1938. The pair divorced in 1954. Graham died of pneumonia on 1 April 1991.