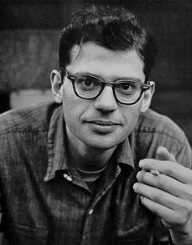 Allen Ginsberg was an American poet considered as the founder of the Beat Movement and the subversive poet of Beat Generation of the 1950s. He is also a key personality in the counterculture that follows the Beat generation. Throughout his life, he always expressed his opinion against militarism, economic materialism, and sexual subjugation. He fought for gay rights and was involved in anti-war movements.

A prolific writer, Allen Ginsberg's legendary and revolutionary poem ‘Howl’ is considered a classic. He relentlessly participated in all forms of non-violent protests against the issues ranging from Vietnam War to the War on Drugs. His contribution to American literature made him one of the outstanding writers and artistic icons of his time.

Irwin Allen Ginsberg was born on June 3, 1926, in Newark, New Jersey, United States. His father Louis Ginsberg was a high school teacher and a poet. His mother Naomi Livergant Ginsberg was a Russian immigrant and was a patient of psychological disorder. She was an active member of the Communist Party and often took both his sons Allen and Eugene to the party meetings.

Allen Ginsberg was brought up in neighbouring Paterson. From his early teenage days, he started writing letters to the New York Times about different political issues such as World War II and worker’s rights. During his high school days, it was the impassioned reading of his teachers that aroused his keen interest in studying the work of Walt Whitman.

Ginsberg attended the Eastside High School and graduated from there in 1943. He attended Montclair State College for a brief period. He earned a scholarship from Young Men's Hebrew Association of Paterson and entered Columbia University on the strength of that scholarship. However, the scholarship amount was not sufficient enough to cover all of his expenses. He joined the Merchant Marines to earn his educational expenditures.

While at Columbia, Allen Ginsberg involved himself in a flurry of literary activities including contributing to the Columbia Review Literary Journal and the Jester humor magazine, winning the Woodberry Poetry Prize. He also served as President of the Philolexian Society (literary and debate group) and joined Boar's Head Society (poetry society) during his study at Columbia University.

In 1948, Allen Ginsberg graduated from Columbia University. In the following year, he was prosecuted for keeping stolen goods in his dormitory room. The property belonged to an acquaintance. To escape the jail sentence, Ginsberg pleaded insanity. As a result, he had to spend several months in the University’s mental health facility. Upon his release, he reassumed his studies under the guidance of poet William Carlos Williams.

Allen Ginsberg worked at a Manhattan Ad Agency for a brief while. Gradually, he got acquainted with many future beat writers. Their similar thinking and concurrent viewpoint intensified their closeness and friendship. He shifted to San Francisco in 1954. He became part of the countercultural movement that was, at that point of time, gathering momentum to be turned into a full-fledged Beat Movement. They were against the traditional inflexible rules of society and adopted new artistic and sensory modes to defy the established set of norms. It was during this time that Ginsberg met Peter Orlovsky, an American Poet, who later became his gay life partner.

In 1955, invited by Wally Hedrick, a painter, and co-founder of the Six Gallery, Allen Ginsberg arranged ‘The Six Gallery Reading.’ It was a landmark event of Beat Generation where both east and west coast functionaries of the Beat movement were congregated. The first ever recitation of his autobiographical controversial poem ‘Howl’ was held in this function. However, the poem got entangled in judicial proceedings.

The poem was banned for obscenity shortly after its publication by the City Lights Bookstore in San Francisco in 1956. But the presiding judge ruled in favor of the poem declaring that the poem is artistically rich in value and the work had merit. In 1959, he founded a poetry magazine called ‘Beatitude’ along with other Beat Generation members such as A. D. Winans, John Kelly, William Margolis and Bob Kaufman.

In 1957, Allen Ginsberg and Peter Orlovsky left San Francisco and went to Paris after spending some time in Morocco. They met Gregory Corso, Burroughs and others in Paris. With the gathering of the like-minded poets in one place, Ginsberg found himself at his creative best and completed some of his major poetical work including the ‘Kaddish and other Poems’ which featured the poem ‘Kaddish for Naomi Ginsberg.’ The poem is a tribute to his mother and is regarded as one of his strongest works. He went on to write during the 1960s and came up with published works like ‘Reality Sandwiches’ (1963) and ‘Planet News’ (1969).

During the year 1962-63, Allen Ginsberg and Orlovsky traveled to India and toured extensively making Banaras and Kolkata as their base. During this tour, the two befriended a few eminent Bengali poets like Sunil Gangopadhyay and Shakti Chattopadhyay. Ginsberg also got fully involved in Buddhism and Krishnaism. In May 1965, Ginsberg reached London and declared his intention to read for free anywhere. He performed the same in Better Books.

The ‘International Poetry Incarnation’ was held at the Royal Albert Hall in London on June 11, 1965. There was a massive crowd of 7000 audiences who had all gathered to hear the live recitation of poems. Ginsberg recited his poetry in the function and also spoke about the Beat Generation of the 1950s projecting himself to be the leader of the movement and its difference with the hippies of the 1960s.

Allen Ginsberg won the National Book Award in 1974 for his book ‘The Fall of America.’ In 1986, he received the Robert Frost Medal in recognition of his literary works. During the 1980s and 90s, Ginsberg continued to write and work with musical artists like Philip Glass, Bono, Sonic Youth and the Clash.

At one point in time, Allen Ginsberg was attracted towards Elise Nada Cowen and became romantically involved with her. However, after meeting Peter Orlovsky in San Francisco, a partnership began between the two. They remained partners throughout their life.

Ginsberg died on April 5, 1997. He was already suffering from hepatitis and congestive heart failure besides other complications. In the spring of 1997, he was diagnosed with liver cancer. The end came in his East Village Loft in New York City at the age of 70.