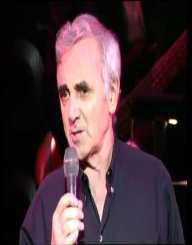 Charles Aznavour was born 22nd May 1924, to Michael Aznavourian and Knar Baghdasarian. He was born in Paris, France and had one sibling, Aida.  Charles Aznavour’s parents were Armenian immigrants, both professional stage performers in Armenia. They fled to France because of the ethnic violence in Armenia. His parents established a restaurant in France.

Over the years that followed, Charles Aznavour had a busy career. He was known as the “French Frank Sinatra”. He has written musicals, and over 800 songs. Aznavour has recorded over 100 records, and his songs have sold over 180 million copies globally. Charles Aznavour had one of his songs go to number one in the British charts in 1974, where it stayed for four weeks.

Charles Aznavour has had many artists perform his songs. They include Fred Astaire, Frank Sinatra, Andrea Bocelli, Bing Crosby, Bob Dylan, Elton John, Tom Jones, Petula Clark, and Shirley Bassey, to name just a few. In 2006, Charles Aznavour began his farewell tour. He toured the US and Canada. In 2007 he toured Japan, Asia, Paris, Belgium, the Netherlands, and other parts of France. In 2008, his tour continued through South America. Aznavour toured the US and Canada again through 2009 to 2011.

Charles Aznavour’s most famous song would be She. It was released in 1974 and went to number one on the UK charts. It remained at number one for four weeks. The song was also recorded in several other languages and was a catalyst for him becoming instantly recognizable around the world.

Charles Aznavour has a long and distinguished list of awards and honors. Here are a few of the more notable ones:

1995:   Ambassador of Goodwill and Permanent Delegate of Armenia to UNESCO
1996:   Induction into the Songwriters Hall of Fame
1997:   Officer of the Legion d’honneur
2008:   Honorary Officer of the Order of Canada
2015: Commander in the Order of the Crown – by Royal Decree

Charles Aznavour has had three marriages. His first marriage was to Micheline Rugel in 1946. His next was to Evelyne Plessis in 1956, and they divorced in 1960. His current wife is Ulla Thorsell, who he married in 1967.

He has six children from his three marriages – Seda, Katia, Patrick, Nicolas, Misha, and Charles.

Charles Aznavour contributed significantly to those in need after the 1988 Armenian earthquake through his charity, Aznavour for Armenia.