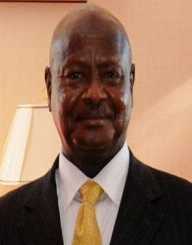 Yoweri Museveni is the 8th and current president of Uganda. He has been the president since he was elected on 29 January 1986. He is the leader behind the economic stability in Uganda. This has earned him much credit as a leader. He has led some rebellious groups. He was among those who brought down the dictatorship leadership of Idi Amin. However, his leadership has constantly been challenged by rebellious groups from North of Uganda.

During his reign, limited presidential terms policy was replaced by a new policy that allows unlimited terms. This has then given him the opportunity to continue serving as the president of Uganda. Western countries that were in favor of his ruling were disappointed by this selfish act. This was no longer a democratic move by the president according to these countries.

Yoweri Museveni was born on August 15th, 1944. His place of birth was Ntungamo in Uganda. His father Amos Kaguta is a cattle keeper. His brother is Caleb Akandwanaho, and Violet Kajubiri is his sister.

Yoweri Museveni started his early education in Kyamate Elementary School. He later joined Mbarara High School followed by Ntare School. It was then that he became a devoted Christian. After his high school, he joined the University of Dar es Salaam in Tanzania in 1967. By 1970 he attained a bachelor’s degree in economics and political science.

Yoweri Museveni began his political career in 1970 while serving Milton Obote the president at the time. They fled to Tanzania along with Obote in 1971. This was during the military coup by Idi Amin. While in Tanzania he taught at co-operative college while forming rebellious forces against Idi Amin. He founded Front for National Salvation in 1973. He returned to Uganda together with other members of his rebellion team during Ugandan Bush War in 1981 to 1986.

In 1985 Tito Okello led a military coup that overthrew the rule of Idi Amin. In 1986 Museveni along with his supporters defeated Tito Okello and took over the city of Uganda.

Yoweri Museveni became the president of Uganda on January 29th, 1986. This was after overthrowing the military coup led by Tito Okello. The economy of Uganda by then was at its lowest. Museveni had a lot of reforms to make.

He led Uganda to participate in IMF. This was an economic recovery plan. With time the economy of Uganda improved by great lengths and stability was also attained. In 1996 Museveni once again claimed the presidency seat after he claimed the highest percentage of votes.

Yoweri Museveni tied the knot with Janet Kataha in 1973. She is still his current wife. The two have four children.