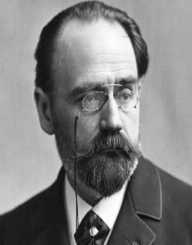 Emile Edouard Charles Antoine Zola was born 2nd April 1840. His parents were Francois Zola and Emilie Aubert. He was born in Paris, France, and he was seven years old when his father died.

Zola and his mother returned to Paris in 1858. They had lived in the southeast of France for the last 11 years.

He sat an exam to study law but didn't pass. As a result, he started to write instead.

During his early career, Zola had several jobs. He worked as a clerk, and he wrote reviews for newspapers. He also worked for a publisher named Hachette.

Hachette sacked Zola after he released his second novel due to the nature of its content.

In 1867, Zola published his first serious novel, Therese Raquin. He followed this with a series called Les Rougon-Macquart.

Between 1871 and 1893, Zola published 20 novels as part of the Les Rougon-Macquart series. The books followed a family who lived during the Second Empire. Zola planned the whole series before he started writing.

During his career, Zola wrote nearly 40 novels. He released L'Assommoir in 1877, and this was the novel that established him as a serious writer. It was a huge success and proved very lucrative for Zola.

He became one of the most noted writers of his time. Due to this, he hosted cultural dinners with other literary notables of the day.

Zola was the most noted of those that followed naturalism. As a result, he had a significant influence on those in later years such as Wolfe, Mailer, and Didion.

In 1894, the French intelligence discovered the Germans were receiving confidential information. A French-Jewish officer named Captain Alfred Dreyfus was arrested and convicted, even though there was no evidence.

Another officer, Ferdinand Walsin Esterhazy, had evidence found against him. His superiors chose not to act, and they left Dreyfus in prison.

Lieutenant Colonel Georges Picquart was the officer that named Esterhazy. He was assigned to Africa for work, but before leaving, he told Dreyfus supporters what was happening.

Zola penned an open letter to the President, which ran on the front page of L'Aurore. This was the daily newspaper of Paris. He knew he might go to prison, but Zola took up the fight for Dreyfus.

Zola made accusations of antisemitism and obstruction of justice against the French Army. He also told of the wrongful conviction of Dreyfus.

Convicted of criminal libel, Zola departed for England straight away to avoid jail. He returned to France 12 months later and was in time to see the government crumble.

Dreyfus accepted a pardon, and in 1906, he received a full exoneration.

The article by Zola was a significant turning point in French culture. It showed the influence that intellectuals had over public opinion.

Zola died on 29th September 1902. His death was controversial due to it being carbon monoxide poisoning from a poorly ventilated chimney. The chimney sweeper admitted some years later that he had blocked the chimney on purpose.

Zola married a seamstress, Eleonore-Alexandrine Meley, in 1870. They remained together for the rest of Zola's life.

He had an affair with Jeanne Rozerot, fathering two children with her. Meley was most upset when she found out, but she stayed with Zola, nonetheless.