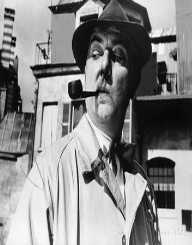 Jacques Tati was originally born Jacques Taticheff on 9th October 1907 in Le Pecq, France. His surname Tati is a French variant of his Russian name Taticheff. He was a descendant of Russian immigrants. His grandfather served as a senior military officer in the Russian Tsar’s Imperial Army. General Dimitri later served as a Russian diplomat in France. Jacques Tati’s parents were Emmanuel Taticheff and Marcelle van Hoof. Marcelle was of mixed Dutch and Italian origin. Emmanuel Taticheff owned a business in Rue de Castellane.

In 1928, Tati graduated from the military service in Lycee Saint-Germain. He studied arts and engineering at the military academy. He excelled in sports during his military service, especially boxing and rugby. He left for London soon after his army service for work apprenticeship. Tati returned to Paris in 1925.

Tati stayed at his family business for a while but decided to join a rugby club. In 1925 he became a player at the Racing Club de France. He played for the rugby club for five years. In the five years, he taught of turning professional at the club. In 1930, Tati left the playing field to pursue another talent, mimic acting. He toured and performed in several music and theatre halls, and in circuses in France. He became famous for his act in imitating prominent French personalities across the society.

Tati went back to the army in 1939. He fought for the French army during WW2. He was discharged after France was liberated from the Germans at the end of the war. Soon after the discharge, Tati got minor supporting roles in two films. He played the lead role in the film The School of Postmen in 1947. In this mimic comedy, Tati took the role of Francois, a French postal officer. This was followed by The Big Day in 1949. The film was first released in London, and a few months later in Paris. Tati was well applauded for his role in the film. The original film was done in Black and white. Several years later in 1995, the film was reproduced in color winning an award at the Venice Film Festival.

In 1953, he got his major film acting breakthrough. He played the leading role in Mr. Hulot’s Holiday. Rowan Atkinson, the British actor did a replica of the film in the 2007 production Mr. Bean’s Holiday. In Mr. Hulot’s Holiday, Tati played Mr. Hulot on a holiday in France. He stays in a hotel and falls in love with the beach resort. Though he did not win any prize, Tati became a household name in French society.

In 1967, he played Mr. Hulot in the film Playtime. This was a continuation of the 1953 film Mr. Hulot’s Holiday. Due to the complicated cast and equipment used in the production, the film took almost nine years to produce. It was eventually released in 1967, with Tati as one of the directors. He became insolvent after the film failed to garner the financial impact he had anticipated.

In 19712, Tati released his third and last part of the Mr. Hulot’s series. The film was well received by his audience. Tati managed to partly recover from the financial drain he suffered during the Playtime debacle. In this third series, Mr. Hulot strives to cope up with the advancement of technology in a large metropolis.

Tati produced other minor films in his career. He employed a unique way of recording his casts. Unlike the conventional zooming of cameras, Tati commonly used long shot recordings in his films. In his half decade career, Tati produced 17 films.

Tati was recognized four times by films institutions. He won a prize at the 1958 Cannes Film Festival for his film My Uncle. He won another prize with the same film at the 1958 Academy Awards. In 1969 he won a prize at the 6th Moscow International Film Festival with his film Playtime. In 1977 he was given an honorary prize by the French Film Institute.

On May 25, 1944, Tati married Micheline Winter. He had two children with her, Sophie and Pierre Tati. The union ended upon his death.

Jacques Tati died on 4th November 1982 of heart complications. His daughter followed in his footstep. She is a film director famous for completing her father’s film Forza Bastia in 1978.