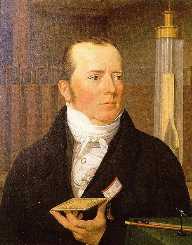 Joseph Louis Gay-Lussac was a French scientist who studied both physics and chemistry; he is best known for discovering that water was made up of two parts hydrogen and one part oxygen.

Gay-Lussac was born on 6 December 1778 in Saint-Léonard-de-Noblat, Aquitaine, France. Gay-Lussac’s father was Joseph Louis Gay, a lawyer. The name Lussac came from a nearby hamlet, and Gay-Lussac’s father would use it as part of his name in legal documentation, they both adopted it as their name in 1803.

The École des PontsetChaussées was a college devoted to scientific research. Gay-Lussac worked as an assistant to C. L. Berthollet, the French chemist.

Gay-Lussac discovered boron and recognised that iodine was an element. 1821, saw Gay-Lussac elected to the Royal Swedish Academy of Sciences as a foreign member. Gay-Lussac developed an improved burette and invented the names ‘pipette’ and ‘burette.’ He was employed by the French government to work on the gunpowder commission, which worked on developing more efficient gunpowder, and for the mint.

Gay-Lussac was elected to the French chamber of deputies for his home region in 1831. In 1832, he took the chair of chemistry at Jardin des Plantes and became a foreign member of the American Academy of Arts and Sciences. In 1839, he was made a member of the Chamber of Peers, the upper house of the French parliament. Gay-Lussac is also credited as the inventor of the portable barometer and the air thermometer.

Gay-Lussac married Geneviève-Marie-Joseph Rojot in 1809. Genevieve worked in a linen-drapers shop. She was noticed by Gay-Lussac as she was reading chemistry at her desk in the store. They had five children together.

Gay-Lussac died on 9 May 1850 in Paris. He is one of seventy-two names honoured with inscriptions on the Eiffel Tower. He was also honoured with streets named after him in Paris, near the Sorbonne where he taught, and in his hometown of Saint-Léonard-de-Noblat.