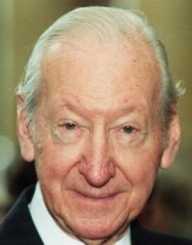 Kurt Waldheim was born on December 21, 1918, in Vienna, Austria. He was a politician and diplomat in Austria. He served as the fourth Secretary-General in the United Nations. He was also the ninth president of Austria after Rudolf Kirchschlager. Thomas Klestil succeeded him after his six-year term.

Kurt Waldheim studied law at the University of Vienna although he worked for the German Army. Kurt however, was a lawyer and diplomat by profession. He died of heart failure in Vienna on 14 June 2007.

Kurt Josef Waldheim was born on 21 December 1918 in Sankt Andra-Worden village close to Vienna, Austria. He was the son of a Czech origin father, Walter Waldheim who was the inspector of schools of the Roman Catholic and mother Elisabeth Waldheim.

Kurt worked in the army for a year from 1936 and later joined the Consular Academy in Vienna for three years where he graduated. It was in this academy that Kurt also joined the National German Students’ League in 1938. Later on, Kurt was enrolled into the German Army when he entered the paramilitary division of the Nazi party.

Kurt Waldheim served as a squad leader of the German Army in Russia in 1941. After succumbing to an injury in combat, Kurt returned after a year and served for three years in the Balkans. In 1945 he became a member of the Austrian Diplomatic Services and took in the position of the Secretary of the legation in Paris. He also worked for the Ministry of Foreign Affairs in Vienna for four years.

Waldheim became the leader of Austria delegation to the UN and was later elected the Austrian ambassador to Canada where he served for four years from 1955. Subsequently, Kurt became the director general of all political affairs in the foreign ministry in Austria. In the United Nations forum in 1964, Waldheim was appointed as the permanent representative of Austria, and after four years he became the Federal Minister for Foreign Affairs. He held the position of Federal Minister for two years and later resumed his post in the UN as a permanent representative for Austria.

In 1971, Kurt Waldheim contested for the presidency of Austria being the People’s Party representative but was not successful. He was therefore elected as the secretary general of the United Nations and served for two terms. In this position, he organized missions for peacekeeping in war-stricken countries and diplomatic services in the Middle East. He attempted negotiations for the release of American hostages in Iran in 1980 but was denied.

Waldheim's attempts to secure a third term in the position of secretary general was not a success since China had its candidate from the third world countries. On June 8, 1986, Kurt Josef Waldheim became the president of Austria and served for six years.

After his term for the presidency ended in 1992, Kurt Waldheim did not seek re-election, and he was given an honor for being a member of the K.H.V Welfia Klosterneuburg which was a Roman Catholic student fraternity. In 1994, Pope John Paul II awarded him a knighthood which was known as the order of Pius IX and his wife a papal honor.

Kurt Waldheim married Elisabeth Ritschel on 19 August 1944, and together they had three children, Gerhard, Christa, and Lieselotte. He worked with McCartney on a concert that was for the benefit of people of Cambodia. Waldheim died on 14 June 2007 of heart failure in Vienna, Austria. His funeral was on 23 June in Vienna at the St Stephen’s Cathedral and was buried in Zentralfriedhof at the presidential vault.