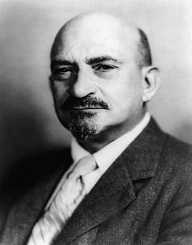 Chaim Azriel Weizmann was a Zionist leader and Israeli statesman. He was born on November 27, 1874. He became first Israel's President on 16 February 1949, after serving as the President of the Zionist Organization. Weizmann served as the President of Israel until his death in 1952. He is remembered for convincing the United States to recognize Israel which was a newly formed state.

In addition to being an Israeli leader, Chaim Weizmann was also a biochemist. He developed the acetone-butanol-ethanol fermentation process. The process leads to the production of acetone through fermentation involving bacteria. This process was highly useful for the British war industry in the course of World War 1.

Chaim Weizmann also established an institution of Science in Rehovot. The institution was named Weizmann Institute of Science which formed a leeway for the establishment of the Hebrew University of Jerusalem in Israel.

Chaim Azriel Weizmann was born in Motal in Belarus. By that time, Belarus was part of Russia Empire. He was the third born in a family that had fifteen children. His father was Oizer, and the mother was called Rachel Czermerinsky Weizmann, a housewife. His father worked as a timber merchant.

In I892, he left Belarus for Germany. He aimed to study chemistry from the Polytechnic Institute of Darmstadt. Weizmann later transferred to "Technische Hochschule" in Berlin. Chaim then joined the University of Fribourg in Switzerland from where he earned a Ph.D. in Organic Chemistry.

While in England, Chaim became the leader of British Zionist group. In 1901, Weizmann joined hands with Martin Buber and Berthold Feiwel to fight for an establishment of a Jewish school in Palestine. Their efforts bore fruits after eleven years when "Technion-Israel Institute of Technology" was set up.

At the University of Manchester, Chaim Weizmann did extensive research in Biochemistry and discovered the process of bacterial fermentation to aid in mass-production. The research was known as "Acetone-butanol-ethanol fermentation" which was highly useful in the World War 1.

His research work at the University earned him accolades from all corners. He was specially recognized by the Britain cabinet who had shown sympathy to the Zion Movement. In 1970, he founded "Palestine Land Development Company" in Jerusalem which offered a more practical approach to Zionism.

In 1917, Chaim Weizmann worked together with Alfred Balfour to lead "British Zionist Federation," and they created "Balfour Declaration." The movement pushed for identification of Palestine as the original home of the Jews. He worked hard in what he termed as looking for a home for the Jewish people.

Weizmann pushed for a peace treaty in 1919 that led to the signing of a covenant between his movement and Arabic Prince Faisal to enhance a cordial relationship between the Jews and the Arabs. Weizmann served as the president of the "World Zionist Organization" in 1920, and worked towards the establishment of Hebrew University in Jerusalem

In 1934, the Zionists helped in the formation of "Daniel Sieff Research Institute" Weizmann became the president-in-charge of the institution. In 1936, he alluded to the fact that the Zionists were losing support despite having over six million Jews were disallowed to live in a lot of places.

The movement became a Jewish Battalion during the Second World War, and they fought against the Italians. Palestine became excessively violent and this discouraged Weizmann. In 1949, Chaim Weizmann was given the privilege to become the President of Israel. He held the position until his death.

As a research scientist in the Biochemistry field, Chaim Weizmann did innovations that were life-changing. In 1904, he started his discovery of industrial fermentation. This discovery was instrumental in mass-production of substances using chemical formula. This helped in fighting during the World War I which was utilized by the British government. As a result, Weizmann gained a lot of respect for the then Prime Minister of Britain, Sir Churchill.

Chaim was determined in ensuring the independence of Israel State. He worked tirelessly to champion and led the Zionist Cause. In 1920, Weizmann worked as the President of their worldwide alliance.

Chaim Weizmann pushed the United States and other countries in the United Nations, to endorse the formation of Israeli State. He was successful as Israel was officially recognized as an independent state. In 1949, he was chosen to become the first president of Israel which he served until his death.

Chaim Weizmann was re-elected as honorary president of the Zionist group of Britain in the 1920's. He was also given the privilege to serve as the first president of independent Israel.

Chaim Weizmann married Dr. Vera Khatzmann. They had two sons together. Flight Lieutenant Michael Oser Weizmann, the younger son, was participated in the Royal Air Force in the course World War 2. He was killed when the plane he was traveling in was shot down in 1942. His body went missing. The second son, Benjie Weizmann, became a dairy farmer in Ireland.

The nephew of Chaim Weizmann, Ezer Weizmann, followed his footsteps and became the president of Israel.

In 1946, Chaim Weizmann published "Trial and Error: The Autobiography of Chaim Weizmann." In the same year, Daniel Sieff Research Institute was renamed after him.