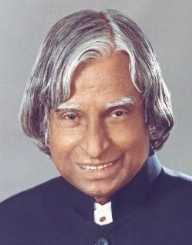 Ayul Pakir Jainulabdeen Abdul Kalam was born on October 15, 1931, in Rameswaram, Pamban Island. He was born during the Madras presidency. His father was a boat owner and imam at the local mosque, and his mother was a housewife. Kalam was the youngest of four sons in the family.

Abdul Kalam's family used to be wealthy traders and landowners and traded groceries between the mainland and the island of Sri Lanka, as well as carrying pilgrims to and back from Pamban. However, when the Pamban Bridge was opened in 1914, the family business started to suffer, and soon they became very poor. As a child, Kalam sold newspapers to help his family.

In school, Kalam was a hardworking and bright student but had average grades. He was mainly interested in mathematics. He attended the Schwartz Higher Secondary School and then went to Saint Joseph’s College, Tiruchirapalli. He graduated with a degree in physics in 1954, and the following year moved to Madras. There he studied at the Madras Institute of Technology, graduating with a degree in aerospace engineering.

Abdul Kalam graduated from the Madras Institute of Technology in 1960 and joined the Defense Research and Development Organization’s Aeronautical Development Establishment. He became a member of the Defence Research & Development Service. At the time, he was also a member of the INCOSPAR committee, where he worked with the space scientist Vikram Sarabhai. He was not entirely convinced by his choice to join the Service, and in 1969, he transferred to the Indian Space Research Organization and became the project director of the Satellite Launch Vehicle.

In 1963, Abdul Kalam went to the United States to visit NASA. During the 1970s, he worked on several projects to develop the Polar Satellite Launch Vehicle. He was also the director of the projects Project Devil and Project Valiant, to develop ballistic missiles. His research brought him to spotlight during the 1980s when he convinced the government to initiate the missile program. In 1992 he began serving as the Chief Scientific Adviser to the Prime Minister and Secretary of Defense, Research, and Development Organization, a position he held until 1999.

Abdul Kalam ran for the presidency of India in 2002 and won the election. He was in office from 2002 until 2007. His nomination from National Democratic Alliance was backed by the Samajwadi Party and Nationalist Congress Party. During his term, he became known as the People’s President. However, during his tenure, he was criticized for not taking action in the fate of 20 mercy petitions, where he could have suspended the death sentence.

In 2007, Abdul Kalam considered to run for a second term as the president but decided not to contest again. However, in 2012, it was reported that Kalam was likely to be nominated for the presidency. He contested in the 2012 presidential poll but did not win.

In 2015, Abdul Kalam traveled to Shillong to give a lecture at the Indian Institute of Management Shillong. He was climbing the stairs and began to feel discomfort, and was not able to enter the auditorium. After a brief break, he started to deliver the lecture but collapsed and was rushed to the nearby hospital. He died in the intensive care unit on July 27, 2015.