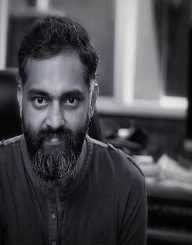 Composer, singer, and keyboardist Bijibal Maniyil was born on the 21 May 1973 in Ernakulam, Kerala, India.

His career began when Bijibal Maniyil composed music for advertisements; then he had an opportunity when the film director Lal Jose asked him to compose the music for Arabikatha. The soundtrack he wrote produced some hits and provided his breakthrough into the Malaysian film industry. Arabikatha was followed by Rock & Roll and Nazrani.

Since then Bijibal Maniyil has had a successful career and has worked on numerous films.

In 2013 he won the National Film Award for Best Background Scorer for Kaliyachan. Bijibal also won the Kerala Film Award for Best Musical Director (2013) for his work on Kaliyachan as well as Ozhimuri. This success was followed up by winning the award for Balyakalasakhi, Njaan, and Pathemari & Nee-Na. Since then Bijibal has worked on numerous films.

He has also recorded an album entitled Vasco De Gama.

Bijibal Maniyil has won some awards including the Kerala State Film Award four years consecutively for Kaliyachan and Ozhimuri (2012), Balyakalasakhi (2013), Njaan (2014) and Nee-Na and Pathemari (2015). In 2017 he won the North American Film Award for Maheshinte Prathikaram.