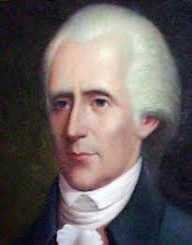 Known for the Lee Resolution, Richard Henry Lee was an American statesman. He made the motion in the Second Continental Congress for getting independence from Great Britain. From the very beginning, Lee was inclined into serving country in one way or another as a number of his family members were doing the same by serving in the military or as legislators and diplomats. His bold moves pushed America to get independence. Initially, he opposed the constitution but later he himself helped in the passing of the bill of rights.

Richard Henry Lee was born in the Westmoreland County of Virginia on 20th of January in the year 1732 to father, Col. Thomas Lee and mother, Hannah Harrison Lee. Lee was born in an eminent Virginia family. As stated earlier as well that he had a legacy of family members serving into the military or were either diplomats or legislators.

Though Richard received his initial education at home but later on he was sent to for higher education to England’s Wakefield Academy in. After graduating from the academy, he traveled to Europe and then, in the year 1752 returned to Virginia. He was taught the integrities of politics by his father and was also taught how to manage people and their efforts.

Richard Henry Lee was married to Anne Aylett in the year 1757 and the couple also had 4 children from the wedlock. His career began on a high and a promising note where he began as a Justice of Peace and thereby entering the House of Burgesses. As the time passes, Lee gained power and position which also showed a positive impact on his oratory skills improving leaps and bounds. This, in turn, gave an opportunity to young and brilliant men to shape the conviction of the nation.

He also played a major role in objecting the Stamp Act where a series of taxes were imposed by the British Parliament to enforce control over colonies. Lee not only objected to the same but he is also credited with the publically authoring of Westmoreland Resolutions. As a result of which things remained very peaceful between the British Parliament and the American colonies for several years.

Richard Henry Lee’s role in moving people towards independence is impeccable. A series of stringent laws had been passed by The British in the year 1774 by the name of “Intolerable Acts” which were specially designed for irate colonies. On being appointed as a member to the Continental Congress, he moved the thinking of American masses from subservience to independence because of his oratory skills in August for the year 1774.

Following the same, at the Second Continental Congress Richard resolution of independence was offered to the Committee of the Whole declaring the need for independence and snatching the same from the British. This also shattered all the political connections between the America and the State of Great Britain. Moving on the same path, the Congress even voted for independence by July 1776.

While the war of independence was on for America, Richard Henry Lee served in the Virginia House of Delegates but had to miss it due to his poor health. After the end of the war of independence in the year 1983, under the Articles of Confederation, Richard served in Congress and later was also elected as the president of Congress unanimously. Richard supported the 1787 Federal Convention in Philadelphia but was worried that the new Constitution lacked a bill of rights and had too much power over the states.

On the ratification of the Constitution in 1789, Richard served as a senator from Virginia. This helped shepherd the passage of the Bill of Rights. Due to health issues, Richard retired from the Senate. On June 19, 1794, Lee died at the age of 62.