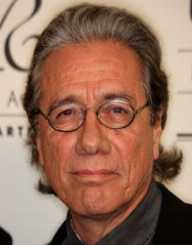 Edwards James Olmos was born on February 24, 1947, in Los Angeles, California. His father was a Mexican immigrant who worked as a welder and mail carrier. When Olmos was seven years old, his parents split up, and his great-grandparents mostly raised him. When Olmos was younger, he wanted to become a professional baseball player, and at age 13, joined the Los Angeles Dodger’s farm system team, playing as a catcher. He played until he was 15 years old when he left the team to join a rock and roll band.

Olmos attended and graduated from Montebello High School in 1964. During his highs school years, he actively participated in student council and ran for the Student Body President. However, he lost the race to future California Democratic Party chair Art Torres. Olmos’ first band was named the Pacific Ocean. Together with the band he performed at various clubs in Los Angeles and 1968, released an album Purgatory. Besides his interest in music, Olmos was also attending acting courses at East Los Angeles College.

During the 1960s and 1970, Olmos began his career in acting, performing in several small productions. His big break was portraying the narrator in the play Zoot Suit. The play was a drama about World War II era riot in California between Mexican-Americans and local police. When the play moved to Broadway, Olmos gained his first Tony Award nomination. He later accepted the same role in the movie version of the play in 1981.

Olmos began his on-screen career with the Japanese science fiction film Virus, which later became a cult classic. His role required him to play piano and sing in Spanish, which he subsequently learned for the role. The film was not a major box-office success, but at the time, it became known as the most expensive Japanese film ever made. During the late 1980s, Olmos appeared in several film and TV roles. His biggest role at the time was in the television series Miami Vice, playing Lieutenant Martin Castillo. For his role, Olmos was awarded a Golden Globe and Emmy Award.

In 1988, Olmos starred in the movie Stand and Deliver, where he portrayed math teacher Jaime Escalante. For his role, Olmos received a nomination for Academy Awards for Best Actor, becoming the first American born Hispanic to receive the honor. In 1992, Olmos made his directorial debut and starred in American Me and My Family/Mi Familia. His next film project was the 1997 film Selena, alongside Jennifer Lopez. In 2001, he portrayed Dominican Republic dictator Rafael Leonidas Trujillo in the film In the Time of the Butterflies. During this time he also a recurring role on the NBC drama series The West Wing. In 2002, Olmos began starring in the PBS drama American Family: Journey of Dreams.

In 2003, Olmos was cast as the Commander William Adama in the science fiction series Battlestar Galactica. Besides starring in the show, he also directed several episodes. Olmos began working as a producer, director, and actor in the HBO movie Walkout, about the Chicano Blowouts. Olmos was also cast on the television series Dexter for its sixth season. His latest television project has been in the second season of Marvel’s Agents of S.H.I.E.L.D.

In 1996, Olmos received an honorary Doctorate of Fine Arts from California State University. He has been actively involved in social activism campaigns, especially affecting the Hispanic community in the United States. In 1997, Olmos became one of the co-founders of Los Angeles Latino International Film Festival. The following year, he founded the Latino Public Broadcasting and served as its chairman. Besides his work with the Hispanic community, Olmos also speaks to at-risk teenagers and has been an international ambassador for UNICEF.