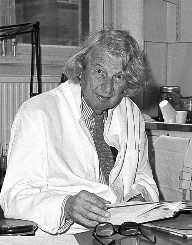 David Hunter Hubel was born on February 27th, in 1926. He was a famed Canadian neurophysiologist mainly for his contribution in studying both the structure and role of visual cortex. In line with this, he was honored with a Nobel Prize in Physiology or Medicine in 1981. This is an award he shared with Torsten Wiesel. They were awarded the Nobel Prize for unveiling how information is processed in the visual system.

David Hunter Hubel was born on February 27th, 1926. His birthplace was in Windsor, Ontario in Canada. When Hubel was aged three, his family migrated to Montreal. Owing to his father’s profession as a chemical engineer, Hubel was strongly influenced to develop a keen interest in the science field. Young Hubel used to carry out experiments in electronics and chemistry during his tender years.

When he was six years old, he joined Strathcona Academy situated in Outremont, Quebec. Here, he schooled for 12 years.

In 1954, David H. Hubel was called to offer his services at the Johns Hopkins University School of Medicine. He was to serve as a house officer in neurology. Sooner or later, he joined the army and earned his appointment at the Walter Reed Army Institute of Research – WRAIR. Here, he began his research into the visual cortex by mainly using cats.
It is while working at the WRAIR that Hubel managed to invent the modern hydraulic microdrive and the metal microelectrode. Shortly after, he migrated to Johns Hopkins in 1958 where he joined hands with Torsten Wiesel in advancing their studies in the visual cortex. Together, they discovered visual cortex’s columnar organization and oriental selectivity.

The following year, Hubel went ahead and became a faculty member of the Harvard University. Later, in 1981, he was credited for being among the founding members of the World Cultural Council. Years later, in 1988 he served as the Society for Neuroscience’s president for a period of one year.

In a partnership lasting for over 20 years, David H. Hubel and Torsten Wiesel carried out extensive scientific researchers that brought advancement in sensory processing knowledge. Their partnership was hailed all over as one of the most productive research partnerships in science. The two were later bestowed with Nobel Prize in Physiology or Medicine in 1981.

They were awarded this prize for two main reasons. First, they earned this award due to their scientific research in visual system’s development. This occurred in the 1960s and 1970s. Their other main contribution was on laying out research groundwork on visual neurophysiology. This work described how visual parcels present in the neo-cortex normally processes eye signals.

David H. Hubel health worsened after the death of his loving wife in 2013. This led to his death on September 22nd, 2013. He suffered a kidney failure leading to his death at the age of 87.