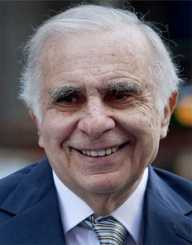 American businessman Carl Celian Icahn was born on the 16 February 1936 in New York City to Michael and Belia Icahn.

Carl C. Icahn graduated from Far Rockaway High School and then obtained a BA in philosophy from Princeton University. He did two years of medical studies at the New York University School of Medicine before enlisting in the U.S. Army.

In the early 1960s, Icahn began work as a stockbroker in New York City. In 1968 he founded Icahn & Co. Because of his business practice of buying a large number of shares in companies to obtain control of them, he was known as a corporate raider.
In 1987, he established Icahn Enterprises.

Today Carl C. Icahn is a diversified investor with holdings in roughly ten business segments including automotive, energy, gaming and real estate. Investments are made through publicly traded Icahn Enterprises and Icahn Partners. As of 2017, Icahn Enterprises’ revenue was over $19 billion. The Icahn Report publishes Icahn’s ideas on shareholder activities and activism. He is involved with the United Shareholders of America platform which campaigns for shareholder rights.

Carl C. Icahn was a special advisor to President Donald Trump. He resigned in August 2017, stating that he was stepping down with the president’s blessing because he did not want partisan bickering about his role clouding Trump’s administration. Democrats had been critical of Icahn’s role in the Trump administration because he did not hold a formal government job and was actively involved with his businesses.

Carl C. Icahn has donated extensively to charitable organisations which deal with the homeless, veterans groups, medicine, and scholarships. He is listed on Giving Pledge. His foundation, the Children’s Rescue Fund has built homeless shelters for single women and their children in New York City.  Icahn funded a genomics laboratory at Princeton University and had also made donations to the Mount Sinai Hospital in New York.

Carl C. Icahn's first wife was former Czech ballerina Liba Trejbal (1979-1999). They had two children: Michaelle Celia (b.1982) and Brett (b.1979).  In 1999, Icahn married Gail Golden. In 2017, Forbes magazine listed Icahn as the 5th wealthiest hedge fund manager with a net worth of over $16 billion. Icahn supported Donald Trump in the 2016 Presidential elections.