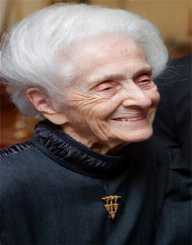 Rita Levi- Montalcini was born on April 22, 1909. She was an Italian American neurologist. In 1986, she won the Nobel Prize in Physiology or Medicine. She is renowned for her work in neurobiology.

Rita Levi- Montalcini was born on April 22, 1909, in Turin, Italy. She was born to Adamo Levi who was an electrical engineer and mathematician and Adele Montalcini who was a painter. She was brought up alongside three siblings. She wanted to become a writer while growing up. Her interests later changed to becoming a doctor. She attended the University of Turin where she was inspired to study the nervous system by neurohistologist Giuseppe Levi.

Rita Levi- Montalcini began her career by setting a laboratory in her bedroom. In her laboratory, she studied the growth of nerve fibres in chicken embryos. In 1943, Italy was invaded by Germans, and so her family moved to Florence for safety purposes. Rita Levi- Montalcini later set up another laboratory at their temporary residence. In 1944, she got a job as a medical doctor at the Anglo-American Headquarters. In 1945, her family moved back to Turin where she resumed her career. The following year she was granted a research fellowship at Washington University located in St. Louis, United States.

In 1947, Rita Levi- Montalcini joined zoologist Viktor Hamburger in his laboratory in the university. She was made a research associate by Viktor. In 1952, she was successful in isolating Nerve Growth Factor. In 1956, she became an associate professor at the Washington University. Two years later she became a full professor. In 1977, she retired from being a professor. In 1962, she assisted in the establishment of the Institute of Cell Biology which is located in Rome. In 1969, she was appointed the director of the institute. In 2001, the President of Italy appointed her as the Senator for Life.

In 1986, Rita Levi- Montalcini won the Nobel Prize in Physiology or Medicine jointly with Stanley Cohen for their discoveries of growth factors. She also received the Albert Lasker Award for Basic Medical Research. In 1987, she was awarded the National Medal of Science.

Rita Levi- Montalcini never got married, but she was close to her siblings. She died on December 30, 2012, at the age of one hundred and three.