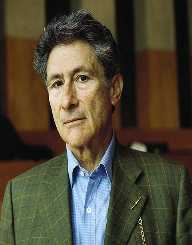 Palestinian-American academic, writer, cultural critic, and political activist Edward Said was born on the 1 November 1935 in Jerusalem. His father William Ibrahim was a wealthy businessman. Due to political unrest when the United Nations partition of Palestine was taking place in 1947, the family relocated to Cairo, Egypt.

Edward Said was educated at English language schools in Cairo then enrolled at the Northfield Mount Hermon School, Massachusetts (1951). He obtained a BA in English Literature from Princeton University (1957) and an MA from Harvard in 1960, followed by a Ph.D. in 1964.

In 1963, Edward Said was employed as a lecturer in English at Columbia University, New York. He held this post until 1967 when he was promoted assistant professor of English and Comparative Literature at Columbia. In 1969, he became a full professor.

Publications include Joseph Conrad and the Fiction of Autobiography (1966) which was based on his doctoral thesis. His influential book, Orientalism was published in 1978. Orientalism focused on the Western view of the Orient about the Arab Islamic world. Other publications include The Question of Palestine (1979), Covering Islam (1981), Blaming the Victims(1988), Musical Elaborations (1991) and Culture and Imperialism (1993).

Edward Said was an outspoken critic of Israel and advocate for Palestine. In 1999, he founded The West-Eastern Divan Orchestra with Israeli musician Daniel Barenboim. Both men believed that art transcends politics and this led to Barenboim giving Palestinian students music classes. Due to ill health as well as the events in Palestine following 9/11, Said withdrew from being actively involved in politics and concentrated on music.

In 1999, he published his autobiography Out of Place and the same year, Edward Said married Mariam Cortas in 1970, and they had a daughter and a son together. Edward Said died on the 25 September 2003 at the age of 67. He had had leukemia for some years.