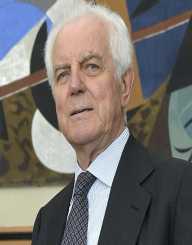 Gilberto Benetton was an Italian businessman.

Gilberto Benetton was born in the city of Treviso, Italy, on June 19, 1941. He had two brothers, named Luciano and Carlo, and a sister named Giuliana. His father, who owned a bike shop, passed away when he was in his teens. He dropped out of school, and he worked several different jobs.

In 1965, Gilberto Benetton teamed up with his siblings to form the Benetton fashion brand. He took care of the administration. Giuliana was the chief designer, Luciano was the chairman, and Carlo took care of the production. They started with a small shop in the Veneto region. They sold colorful sweaters and shirts. They quickly expanded all over Italy, and then they continued into Europe.

Today, the company has grown into a multi-billion dollar empire. There are 5000 stores in over a hundred countries around the world. They are mostly known for their colorful clothes, but they also sell shoes, bags, and accessories. Their two most famous clothing lines are United Colors of Benetton and Sisley. They have also gained a lot of attention because of their socially progressive ads. They have sponsored several Formula One participants.

Apart from the fashion business, Gilberto Benetton also invested in other companies. He had a part in Atlantia, a road-building company. He owned Autogrill, food service for highways and airports. He had shares in Telecom Italia, the investment bank Mediobanca, the Asolo golf club, the tire company Pirelli, and the media group RCS. He owned the basketball club Treviso Basket. He sponsored different volleyball and rugby clubs. He worked on some of these companies himself. For the others, he formed a financial holding with his family, called Edizione.

Gilberto Benetton's brother Carlo passed away in July of 2018. In August, a bridge in Genoa collapsed. Forty-three people died, and the disaster was publicized worldwide. The bridge was owned and built by Atlantia, one of the companies he had shares in. The public blamed the company for the disaster, causing a loss worth billions of dollars. These events had a significant impact on Benetton’s health. He passed away on October 22, 2018, in his home in Treviso.

The Edizione financial holding is now in the hands of the younger generation. That includes Gilberto’s daughter Sabrina, as well as his nephews Alessandro, Rocco, and Christian.