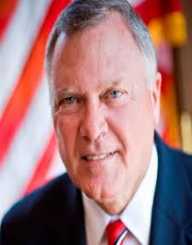 John Nathan Deal, popularly known as Nathan Deal, was born on August 25, 1942, in the town of Millen at the U.S. State of Georgia to Noah Jordan Deal and Mary Mallard. Both his parents were teachers by profession. He grew up on a farm in Sandersville in Washington County, Georgia. Deal attended Mercer University in Macon and earned his Bachelor’s degree in 1964. He received his ‘Juris Doctor Degree’ from the ‘Walter F. George School of Law’ of the Mercer University in 1966.

John Nathan Deal joined the United States Army after completing the law school and earned the rank of Captain. He served the army for the next two years. He was posted at Fort Gordon in Augusta from 1966 to 1968. After that, Deal started private law practice as an Attorney, a career which he pursued for the next 23 years including his term of working as a criminal prosecutor. In 1970, he was appointed as the Assistant District Attorney in Northeast Georgia. He received his first judicial appointment in 1971 when he was inducted as the Juvenile Court Judge of Hall County. He held the position until 1972. He was the North-eastern Judicial Circuit Superior Court Judge after the tenure.

On January 3, 1981, John Nathan Deal was elected to the Georgia Senate from the 49th district as a member of the Democratic Party succeeding Howard Overby in the process. His long tenure in the Georgia State Senate ended on January 3, 1993. In November 1990, Democratic Party elected him to contest the election of President Pro Tempore, the Chamber’s second highest position. He was eventually replaced by Jane. R. Hemmer, who was defeated by the Republican Party nominee Casey Cagle.

John Nathan Deal entered the U.S. Congress as a Democrat to become a member of the U.S. House of Representatives from the 9th Congressional District of Georgia on January 3, 1993. He succeeded eight-term incumbent Ed Jenkins and was subsequently re-elected as a Democrat in 1994. On April 11, 1995, he switched his allegiance to the Republican Party, shortly after the party successfully wrested control of the U.S. House of Representatives. This happened for the first time in the past 40 years.

John Nathan Deal continued to be re-elected as a Republican and served for another eight terms winning 1996, 1998, 2000, 2002, 2004 and 2006 election. He defeated his Democratic opponent, attorney McCracken ‘Ken’ Poston. He was elected unopposed in 1998, 2002 and 2004. During his tenure of 17 years as a member of U.S. House of Representatives, he was made the Chairman of the Health Subcommittee of Energy and Commerce where he proved his ability in health care policy and expertise on entitlement reform. Citizen Reform Act, H.R. 698 was initiated by him which would abolish the birthright citizenship for illegal foreigners in the United States.

On March 21, 2010, John Nathan Deal resigned from the membership of U.S. House of Representatives to concentrate on the gubernatorial election of the state of Georgia. Before placing his resignation, he cast his last Congressional vote against the Patient Protection and Affordable Care Act, popularly known as ‘Obamacare.’ In a keenly contested primary, Deal faced a crowded field of candidates. In the July Republican Primary, no candidate amongst the seven contesting candidates was able to win the Republican Primary Election with an absolute majority. On August 10, 2010, a runoff election followed between former Georgia Secretary of State Karen Handel and Nathan Deal. The closely contested election saw Deal winning with a narrow margin of 2519 votes.

John Nathan Deal was pitted against the Democratic opponent Roy Barnes, a former Governor and State Senator, for the gubernatorial election of Georgia. On November 2, 2010, Deal became victorious securing 53% of the vote. On January 10, 2011, he became the 82nd Governor of Georgia. He ran for reelection in 2014 and again emerged victorious defeating his Democratic rival State Senator Jason Carter.

John Nathan Deal' biggest achievement since assuming the office of Governor of Georgia was making the state no.1 in the nation for four consecutive years. In spite of protests outside his office and looming threat of boycott during his first term as Governor, Deal remained adamant about signing the HB 87 into law. The law increased the State’s enforcement power regarding illegal immigration. Bringing this law under implementation was also considered as his major achievement. He also helped in the creation of nearly 600,000 private sector jobs. Georgia’s job growth eclipsed the national average during the last six years of his tenure.

John Nathan Deal's revolutionary initiative in tax reforms, workforce development initiatives and investment in education and infrastructure saw Georgia climb the ladder to become the global destination for top companies around the world for a wide range of industries.

John Nathan Deal also made Georgia a leader in criminal justice reform. Georgia was in the midst of a criminal justice crisis with high incarceration costs and recidivism rates when Deal took over. He implemented a series of bipartisan reforms which succeeded in saving a $264 million taxpayers’ money and reduced the need for around 5000 prison beds. John Nathan Deal is a firm believer that good education is the foundation of success. During his tenure, he kept education as the top priority and had taken several measures to improve the education system and its impact on the job market.

John Nathan Deal is married to Sandra Dunagan, who hails from Gainesville, Florida and is a graduate of Georgia College and State University in Milledgeville. They are blessed with one son, Jason and three daughters, Katie, Carrie and Mary Emily. The couple is married for 51 years now and has six grandchildren too.

As the First Lady of Georgia, Sandra Dunagan is involved with a host of activities including community service, volunteering and boosting the education of children. She heads the Governor’s Office for Children and Family and also co-chairs the Georgia Children’s cabinet.