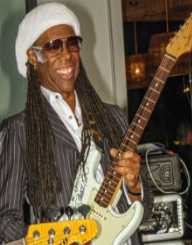 Record producer, songwriter, and musician Nile Rodgers was born in New York City on the 19 September 1952. His mother was thirteen at the time of his birth, and initially, she gave him up for adoption. He was renamed Gregory by his adoptive mother. Rodger’s birth mother fought to get her son back and regained custody of her child, leaving school to do so. Both Rodgers’s mother and stepfather were beatniks and heroin users, but they were also kind and loving. He was brought up in New York and also, at various intervals, in Los Angeles. In interviews, he has said that his unusual upbringing made him self-reliant and responsible. During his teenage years, he belonged to the Black Panther Party as a means of learning self-defense and being part of the Harlem community. As a teenager, he worked at an airport cleaning jet for Hollywood A-listers such as Frank Sinatra.

One of Nile Rodgers first jobs as a seventeen-year-old was touring as a band musician with the television show Sesame Street.

Around this time, he worked at the Apollo Theatre where he was introduced to a fellow musician, bass guitarist, Bernard Edwards. The pair formed a band, The Big Apple Band, and worked as backup musicians for the vocal group New York City. In 1977, when they discovered that there was another band named the Big Apple Band, they changed their band’s name to Chic.

Nile Rodgers and Edwards formed the CHIC Organization Ltd. which produced their band as well as other artists. Their first album C’est CHIC (1978) was Billboard’s No.1 R&B Album of 1979 and contained the hits I Want Your Love and Le Freak. Le Freak topping the disco, R&B, and pop charts. The single became Atlantic Records biggest selling single in the history of the company. Rodgers and Edwards then produced the Sister Sledge album We Are Family (1979) with two singles from it reaching number one on the R&B charts. We Are Family became a worldwide hit and songs like Lost in Music, and He’s The Greatest Dancer became dance floor classics. Chic’s third album Risque (1979) was another success.

During the 1980s and 1990s, Nile Rodgers recorded three albums of his own. He also worked as a performer and producer with other artists. These artists include Madonna, David Bowie, Britney Spears, Diana Ross, Bryan Ferry, Duran Duran, Sister Sledge. Christina Aguilera, Lady Gaga, Keith Urban, Kylie Minogue and many others.

His work with Diana Ross on her self-titled album Diana (1980) produced the hits I’m Coming Out and Upside Down.

Chic disbanded in 1983, and Nile Rodgers brought out his first solo album Adventures in the Land of the Good Groove. He continued producing other artists work including David Bowie’s most successful album, Let’s Dance. He produced Duran Duran’s The Reflex remix. Then he worked with Madonna on her Like A Virgin album which produced her mega hits Material Girl and Like A Virgin, establishing her brand worldwide. Other projects included working with Robert Plant and The Honeydrippers, Mick Jagger, Jeff Beck, the Thompson Twins and Sheena Easton. Nile Rodgers was also involved with the Live Aid concert and worked on various soundtracks. His first soundtrack was for the Eddie Murphy film, Coming to America.

Throughout the 1990s Nile Rodgers continued producing and working with other artists including the Vaughan Brothers, Eric Clapton, Cathy Dennis and Patty Griffin and the Stray Cats. He also worked on the soundtrack for the film Thelma and Louise plus others. In the early 1990s, Rodgers and Edwards got together and reformed Chic, recording an album Chic-Ism which they took on tour. When touring with Chic in Japan, Bernard Edwards died suddenly of pneumonia.

Nile Rodgers has won multiple nominations and awards over the years. In 2005 he was inducted into the Dance Music Hall of Fame, in

Nile Rodger’s has documented his life in his autobiography, Le Freak: An Upside Down Story of Family, Disco & Destiny. He has had various partners, but he never married and had no children.

In 2011 it was announced that Nile Rodgers had prostate cancer and he documented his journey with the disease in a blog, Walking on Planet C. He advised his Twitter followers in mid-July 2013 that he was cancer free.