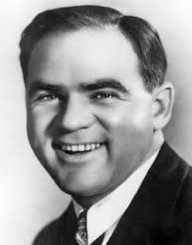 Hal Roach was an American producer, director, screenwriter, and actor.

Harold Eugene Roach was born in the city of Elmira, New York, on January 14, 1892. After finishing school, he worked different jobs. He spent some time mining gold in Alaska.

Hal Roach moved to Hollywood in 1912. He began his career by working as an extra in silent films. In 1914, he started his own production company. In 1920, he created Hal Roach Studios.

Roach began producing comedies with his friend, the actor Harold Lloyd. His first success came in 1915 with the film Just Nuts. He created many more comedic hits with Lloyd until his departure in 1923.

He also collaborated with other actors. One of his most famous works was the comedy series Our Gang. It featured a group of kids and their everyday adventures, games, and arguments. It lasted from 1922 to 1944.

His most famous work was Laurel and Hardy. It was a comedy series featuring Laurel, a clumsy English man, and Hardy, an uptight American. The duo starred in many films, such as Liberty, The Music Box, Way Out West, and many others. They were active from 1927 to 1955.

Hal Roach first released his films through the company Pathe Exchange. In 1927, he switched over to Metro-Goldwyn-Mayer. The next year, he started to produce sound films instead of his usual silent ones. In the early 1930s, he began to create full-length films instead of his typical short films.

In 1937, he created a production company with the son of the Italian dictator Benito Mussolini. This caused MGM to end his contract, so he transferred to United Artists. By the late 1930s, comedy became less popular, so he focused on other genres. He directed dramas such as Of Mice and Men and action films such as Captain Fury.

During World War II, Roach produced many training films and propaganda films for the U. S. Military. In 1946, he became one of the first producers that fully embraced filming in color. In 1948, his studio started to produce some television shows. Soon, many of his old hit films received film and stage adaptations.

In 1955, Hal Roach handed over the company to his son. He did not manage to run it successfully. The company was in massive debt. It was finally shut down in 1961. Hal Roach Studios has since then changed many owners.

After leaving his company, Hal Roach spent the next few decades consulting on different comedy projects. He received an honorary Academy Award in 1984. He turned 100 years old in 1992. That year, he was a guest on the Tonight Show starring Johnny Carson. He received a Lifetime Achievement Award from the Berlin International Film Festival. He also got a standing ovation at theAcademy Awards.

Hal Roach died on November 2, 1992, in his home in Bel Air, California. He was buried at the Woodland Cemetery in his hometown of Elmira.