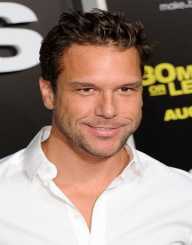 Dane Jeffrey Cook was born on March 18, 1972, in Cambridge, Massachusetts. He is the second son of Donna Jean and George F. Cook. He has an older brother and five sisters. As a child, Cook was introvert and pretty quiet. In junior high school, he began acting and doing stand-up comedy. In college. He studied graphic design in case his career as a comedian didn’t work out.

In 1992, Dane Cook was scheduled to perform as a comedian at the Boston Garden as a part of the WBC's “Rock of Boston” concert. He and a group of local comedians had to perform between the Spin Dogs and final headliner Phish. The audience was not expecting comedy performance and threw shoes at the stage.

In 1994, Cook moved to New York and began performing. Two years later he moved to Los Angeles. His big break was in 1998 when he appeared on Comedy Central’s Premium Blend.

In 2003, Dane Cook released his first comedy-album Harmful If Swallowed, after signing a contract with Comedy Central Records. The album was certified platinum. In 2005, he published his second album Retaliation, which went double platinum. For this album, Cook became the first comic in 29 years to have a record on the 4th place on the Billboard charts.

In 2005, Cook performed in HBO’s particular Vicious Circle, and the same year released two episodes of his sitcom Cooked. He has also been a headliner for Dave Attell’s Insomniac Tour and co-hosted Teen Choice awards with Jessica Simpson in 2006. Cook's recognition and success was growing. In the following year, he became the second comic in history to sell out Madison Square Garden.

Dane Cook began acting with small roles in late 1990. In 2006 he starred in a leading role in Zak Bradley’s “Employee of the month.” Next year he starred in the movie Mr.Brooks with Kevin Costner, which debuted at No.4. His next project Good Luck Chuck became the No.1 grossing comedy in its opening weekend.

Later on, he was a part of a few successful comedy projects and even auditioned for the role of Captain America. In 2015, Cook also starred, and executive produced movie 400 Days.

In 2012, Cook made a joke about the Aurora shootings, which was built national headlines. He later apologized saying that he made a bad judgment call.

Cook’s half-brother Darryl and his wife were his business managers until 2008. It was discovered that the both embezzled millions of dollars from him and were convicted and sentenced to prison. Joe Rogan and other comedians have accused Cook of plagiarism.

Dane Cook has been living together with his girlfriend Raquel since 2006. Cook lost both of his parents to cancer.