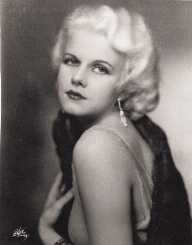 Jean Harlow was born on March 3rd, 1911. Her place of birth was in Kansas City, Missouri. She was mostly mimicked “Blonde Bombshell” or “The Baby.” Harlow did set the trends during her existence with her amazing looks and unique taste of fashion. Hell’s Angels (1930) gave her a career breakthrough after featuring in the film.

Jean was the sex goddess, and this was what she was famous for. Nonetheless, she later proved to be a talented comic when she featured in Red-Headed Woman in 1932. Harlow’s career was at its peak when she died from kidney failure in 1937.

Harlean Harlow Carpenter was born in 1911 in Kansas City, Missouri. She was the only daughter to Mont ClairCarpenter and Jean Poe Carpenter. Jean’s mother was from a wealthy family while her father was an ordinary dentist. She went to school in Miss Barstow's Finishing School for Girls which was located in Kansas City. It did not take time before her parents parted ways and she went on to reside with her mother.

Soon, her mother shifted to Chicago and enrolled her in Hollywood School for Girls. Her mother aspired to earn a living from a Hollywood career, but her missions bore no fruits. This left them with no other option but to move back to their original homeland, Kansas, City.

Harlow later attended Ferry Hall School in Illinois where she befriended Charles McGrew. The two eloped together and got married when Harlow was just 16 years. However, their marriage did not last long as the young talented actress resorted to pursuing her acting career.

At the beginning of Jean Harlow’s Hollywood career, she chose to go by the stage name Jean which was her mother’s first name. Jean Harlow instantly caught the public attention more so in the comedy she featured in, Double Whoopee (1929). During the same year, she made her first sound appearance in the film The Saturday Night Kid. Her major career breakthrough came in 1930 following the release of Hell’s Angels.

The following year, Jean Harlow featured in 6 films some of which include Platinum Blonde and The Public Enemy. She proved her fans wrong by featuring in a comic film in 1932 called Red-Headed Woman. In the same year, Red Dust was yet another film she was part of.

In 1933, Jean was paired with some hit films with Clark Gable. These films included Bombshell, Hold Your Man and Dinner at Eight. In a poll conducted by Motion Picture Herald, Harlow was ranked among Top Ten for her exceptional performance.

In 1937, Jean Harlow was screening Saratoga when she became sick. She complained of stomach pain, tiredness, nausea, etc. Afterwards, she was confirmed dead as a result of uremic poisoning.

Jean Harlow’s first marriage came when she was 16 years of age. She eloped with Charles McGrew. Their marriage lasted for 2 years. She was married for a second time to Paul Bern, a producer. Her second marriage only lasted a few months.

Close to 50,000 people appeared to see Jean Harlow while featuring in her first film Hell’s Angels. Harlow was ranked by the American Film Institute as the 22nd greatest female star. On the other hand, Entertainment Weekly ranked her as the 49th “Greatest Movie Star.”