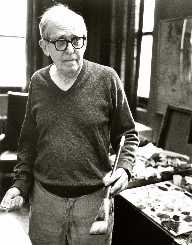 Social realist artist Jack Levine was born in Boston, Massachusetts in 1915 to parents who had immigrated to the US from Lithuania. His father was a shoemaker.

Jack Levine had his drawings exhibited in an exhibition at the Fogg Art Museum at Harvard (1932). After finishing university, he was employed by the Works Progress Administration (1935-1940)

The Museum of Modern Art exhibited The Feast of Pure Reason (1937), and Jack Levine also had the String Quartet shown at the Whitney Museum of Modern Art (1937). When Levine’s father died in 1939, he began painting images of Jewish sages, and New Testament inspired scenes. From 1942 until 1945, he served in the US Army. Upon his return home after the war, he painted Welcome Home (1946), a satirical jab at the military power that angered some. The painting also drew the attention of The Home Un-American Activities Committee.

During 1946, Jack Levine relocated to New York City and in 1951, after being awarded a Fulbright grant, he travelled to Europe where was inspired by the work of El Greco and Goya. Back home in New York City, he painted Gangster Funeral, Election Night (1954), Inauguration (1958) and Thirty-Five Minutes from Times Square. He also portrayed his wife, Ruth Gikow and their daughter Susanna.

He responded to turbulent political times by producing Birmingham ‘63, Panethnikon (1978) and The Arms Brokers (1982). During the 1980s, he returned to the themes from the Old Testament. The Vatican acquired his painting Cain and Abel in 1973. In 1979, the Jewish Museum in New York held a retrospective of his work.

Jack Levine was made an Associate of the National Academy of Design in 1979 and a full member in 1982. His work is shown in many important collections including the Whitney Museum of Modern Arts, the National Gallery of Art in Washington, DC;  the Metropolitan Museum of Art, New York and the Art Institute of Chicago.

Jack Levine married the artist Ruth Gikow in 1946, and they had one child, a daughter Susanna. Gikow died in 1982. Levine lived to be 95, dying at home in Manhattan, New York on the 8 November 2010.