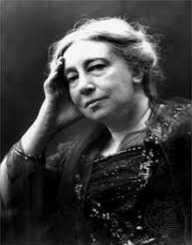 Isabella Augusta Persse was born 15th March 1852, in Roxborough, County Galway, in Ireland. Gregory had 12 brothers and sisters, and she was born into a wealthy family. Roxborough was the name of the family estate, which was 6,000 acres in size.

Gregory's nanny introduced her to local history and legends of the area.

Gregory married Sir William Henry Gregory on March 1880. He was 35 years older than Gregory, and he had recently retired. He had worked as the Governor of Ceylon. Before that, Sir William was a Member of Parliament for several terms.

Sir William had received an excellent education. His house had an extensive library, as well as a significant art collection. Lady Gregory immersed herself in the culture. Sir William also owned a home in London where they spent much of their time. They regularly entertained guests, including the most prominent members of the literary scene at the time.

Lady Gregory often traveled with her husband. They visited countries such as India, Ceylon, Italy, Spain, and Egypt.

She first published a pamphlet called, Arabi and His Household in 1882. Over the next few years, Gregory continued to write. She wrote mainly prose and brochures, but she also worked on a series of memoirs.

Sir William died on March 1892. After her husband's death, Lady Gregory returned to their home in Coole Park. She prepared her husband's autobiography for publication, and she released it two years later.

In 1893, Gregory traveled to the Aran Islands. She renewed her interest in the local folk legends of the area, as well as the Irish language.

Lady Gregory published several books related to the folklore she had collected. The titles included A Book of Saints and Wonders (1906), and The Kiltartan Wonder Book (1910).

The publication of Sir William's autobiography met with success. Due to this, Gregory began work on preparing another volume called Mr. Gregory's Letter-Box 1813-30. Released in 1898, the book contained letters belonging to Sir William's grandfather.

During her research, Lady Gregory became a strong supporter of Irish nationalism. She also learned not to trust the English.

In 1896, Lady Gregory's neighbor, Edward Martyn, introduced her to W. B. Yeats. In 1899, the three of them started the Irish Literary Theatre. The theater lasted two years and then closed due to lack of funds.

In 1904, along with several others, Gregory co-founded the Irish National Theatre Society. Two patrons purchased a theater in Lower Abbey Street as well as a building in the next street. The Society accepted the use of the buildings in May 1904.

Lady Gregory worked as a director of the theater until she retired in 1928 due to ill-health.

She had written over 19 plays in the two decades she had worked at the theater. Her plays were about a local legend. When they were first performed, they were among the most popular productions, but their popularity waned.

After her retirement, Gregory moved to Galway. In 1927, she sold Coole Park to the Irish Forestry Commission.

From 1882 to 1931, Gregory published almost 40 works. After her death, six more books were published. These included her autobiography, journals, and diaries.

Although her plays became unpopular after she died, her diaries and journals were famous.
Lady Gregory is recognized as one of the most influential writers of her time. This is due to the information on local history that is found in her writings.