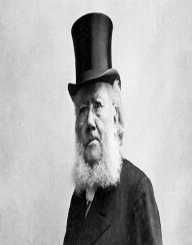 Norwegian writer Henrik Johan Ibsen was born on March 20, 1828, in Skien, Greenland, Norway. He was born in a merchant family to his mother Marichen Altenburg and father, Knud Ibsen. His family was well-respected in Skien. His grandfather had died in the sea, and his father Knud was raised on the ship-owner’s Ole Paus estate.

When Ibsen was young, his father’s fortunes severely declined, and the family had to sell their home in the central part of the town and move to their small summer house outside the city. His father’s financial misfortunes were later and inspiration for many of Ibsen’s works.

When Henrik Ibsen was 15 years old, he left school and went to live in a small town Grimstad, working as a pharmacist’s apprentice. At the time he also started to write plays. When he was 18 years old, Ibsen had an illegitimate child that he never saw but paid the mother for until the boy was a teenager. Ibsen intended to study in the university in what is now Oslo. His previous attempts were unsuccessful because he didn’t pass entrance exams. Ibsen gave up on the idea to study in a university and devoted himself to writing.

Henrik Ibsen wrote his first work, the play Catilina in 1850. He published it under a pseudonym Brynjolf Bjarme when he was 22. His next game The Burial Mound was staged but received little attention. Even though numerous plays he wrote were unsuccessful, Ibsen was determined to be a playwright.

Ibsen started to work at Det Norske Theater, where he was involved in writing, directing and producing more than 145 plays. In the theater, he gained a lot of experience, although his work was still unrecognized. In 1958, he returned to Christiania (Oslo) where he became the creative director of the Christiania Theater. In 1864, he and his wife went to Italy and didn’t return to Norway for the next 27 years.

In 1865, Henrik Ibsen wrote his play Brand, which was finally critically well acclaimed. The play was also a financial success. His next work was the famous play Peer Gynt in 1867. After succeeding, Ibsen became more confident about his work and started to introduce more personal beliefs in his work. This era is often referred to as Ibsen’s Golden Age, where he became the center of dramatic controversies in Europe.

After his time in Italy, Ibsen moved to Germany in 1868. There he worked on the play Emperor and Galilean (1973). In 1975, he started to work on his contemporary realist drama The Pillars of Society, followed by A Doll’s House. His work often represented Ibsen’s thoughts on the mortality of the society he is living in. His play Ghosts (1881) was quite scandalous. It tells a story about a widow revealing the evils of her marriage after she took the advice of a pastor and married a man who was philandering. Her husband’s vices were passed on to their son in the form of syphilis.

1882 play An Enemy of the People was also controversial. The first part of the play represents Ibsen’s belief that an individual is often more right than the mass of people who are ignorant. In the game, Ibsen attacks the conservatism and liberalism of the time.

Ibsen’s 1884 play The Wild Duck is considered to be his most beautiful work. The game is a complex representation of Ibsen’s masterful irony and understanding of the ideals of society.

In his later work, Henrik Ibsen focused more on the drama than the moral values of society. His plays Hedda Gabler and The Master Builder concentrate on the psychological conflicts of its characters.

Ibsen brought the movement of realism in a theater. He was later an inspiration for Chekhov and other famous playwrights. William Archer and Edmund Goose then brought Ibsen’s works to English speaking audiences. Ibsen played a significant role in the movement of modernism.

In 1858, Henrik Ibsen married Suzannah Thoresen, and they had a child - Sigurd. His son later became a government minister and a lawyer. At the beginning of their marriage, the couple lived in impoverished circumstances. After moving to Italy and gaining his first success, the family’s financial situation changed for the best.

In 1900, Ibsen suffered from a series of strokes and died six years later at his home in Oslo. In 1995, an asteroid was named after Henrik Ibsen. 2006 was declared the Ibsen Year in honor of the 100th anniversary of his death.