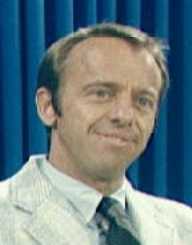 American astronaut and aviator Alan Shepard was born on the 18 November 1923 in Derry, New Hampshire in the United States.

Alan Shepard was awarded a B.Sc. from the United States Naval Academy in 1944. He became a qualified pilot in 1950 and in 1957 he obtained his M.A. from the Naval War College.

During World War II (1939-1945) Alan Shepard was on the destroyer Cogswell in the Pacific. He did flight training in Texas and Florida, obtaining his wings in 1947. He was then sent with Flight Squadron 42 to Norfolk Virginia and Jacksonville, Florida. During this time he did several tours on aircraft carriers in the Mediterranean. In 1950 he did pilot training at the U.S. Test Pilot School in Patuxent River, Maryland, taking part in flight test work and experiments.

His next assignment was with Flight Squadron 193 in Moffett Field, California where he was part of a night fighter unit which flew Banshee jets. After graduation from the Naval War College, Newport, Rhode Island in 1957, Alan Shepard became a member of the staff of the Commander-in-Chief of the Atlantic Fleet as an aircraft readiness officer.

Rear Admiral Shepard was one of the Mercury astronauts announced in April 1959 by NASA. He rose to fame on the 5 May 1961 when as a former Navy test pilot he was sent into space aboard the spacecraft (a Mercury capsule on a Redstone rocket) Freedom 7. The flight took fifteen minutes and touched on the edge of the area at an altitude of 115 miles before splashing down in the Atlantic Ocean 300 miles from Cape Canaveral in Florida. Shepard thus became the first American in space. The success of the mission contributed President J.F. Kennedy announcing, on the 25 May 1961, his goal of landing a man on the moon.

Alan Shepard was appointed Chief of the Astronaut Office in 1963. He was responsible for the coordination, scheduling and control of all activities involving NASA astronauts. After being diagnosed with Meniere’s Disease in 1964, he stood down from this position. He was restored to full flight status in May 1969 after corrective surgery on his inner ear.

Alan Shepard was made spacecraft commander on Apollo 14, and the mission took place between the 32 January and the 9 February 1971. His fellow astronauts were Stuart A. Roosa and Edgar D. Mitchell. In June 1971, Shepard was again appointed Chief of the Astronaut Office, and he held this position until his retirement in August 1974.

After his retirement from NASA, Alan Shepard was involved in business in Texas, and he was also president of the Mercury Seven Foundation, a non-profit organisation which provided science scholarships.

Alan Shepard received many accolades and awards including the Congressional Medal of Honor (Space), The NASA Distinguished Service Medal (twice), the Navy Distinguished Service Medal, the Navy Distinguished Flying Cross, the Langley Medal from the Smithsonian Institution and the City of New York Gold Medal. He was a Fellow of the American Astronautical Society as well as a member of the Society of Experimental Test Pilots, the Mayflower Society and the American Fighter Aces.

Alan Shepard was married to Louise, and the couple had three daughters: Julie, Laura and Alice as well as six grandchildren.

In 1964 Alan Shepard was diagnosed with Meniere’s Disease, which is a disorder of the inner ear which causes vertigo, tinnitus and hearing loss. Later in life, he had leukaemia.