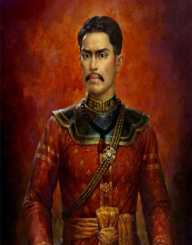 Taksin was born on 17th April 1734, to Yong Saetae and Lady Nok-iang. He was born in Ayutthaya, in the Ayutthaya Kingdom. His father was a tax collector of Chinese descent, and his mother was Thai.

The Prime Minister, Chao Phraya Chakri, adopted Taksin. Taksin impressed him, and he raised him from a young age. Chakri gave Taksin the name "Sin" which means treasure or money.

When Taksin turned seven, he started his education under a monk called Thongdee at a local Buddhist monastery.

At the age of 14, Chakri sent Taksin to the palace to serve under King Ekkathat as a royal page. He continued with his study, and because fluent in several Indian dialects, as well as Vietnamese and Hokkien-Chinese.

When the Burmese attacked southern Siam (present-day Thailand) in 1764, they won their first battle. They then marched to Phetchaburi, but Generals Kosadhibodhi and Phraya Tak met them there. The Thai soldiers won the fight, and the Burmese had to turn back.

The Burmese attacked again in 1765. This time they attacked Ayutthaya, but Taksin led a Thai victory. The Thai and Burmese armies fought for over a year throughout the region.

In early 1766, Tak got out of the Ayutthaya region, along with 500 of his men. Ayutthaya fell in April 1767. He built a small army of supporters, who began to call him Prince Tak.

The Thai king died when the Burmese took Ayutthaya. The country split into six regions, and Tak ruled one of them. His close friend Tong-Duangwas in charge of another. Between them, they drove out the Burmese and won the battle.

Ascension To The Throne

During the next few months, Taksin defeated the Burmese and drove them out of Siam. With the kingship in sight, Taksin made sure he did the right thing. He gave a royal cremation to King Ekkathat, and he looked after the royal family.

He established a new capital in Thonburi which was more suitable than Ayutthaya.

Taksin ascended to the throne on 28th December 1767.

Taksin decided he would reunify Siam again. The country split into several sectors during the war. As a result, each had a ruler that didn't want to give up power. Each ruler lost to Taksin one by one. As a result, Taksin united the country.

Taksin realized the north of Siam would remain under constant threat while the Burmese ruled Chiang Mai. Several battles ensued, and Chiang Mai became a deserted city. Its inhabitants resettled in Lampang. During the 15 years that Chiang Mai was a ghost town, Taksin took control.

In 1779, Siam took authority over Cambodia.

The economy was suffering when Taksin took over. Using his own money, he bought food and encouraged international traders to bring their wares. Taksin distributed food and clothing to his people, and the economy recovered in time.

In 1772, the Chinese emperor recognized Taksin as the legitimate king of Siam. Taksin encouraged the Chinese to migrate to Siam to assist with growing the economy. The Chinese community developed over time, which caused angst among the local nobility.

Taksin worked on public welfare, and he restored the Buddhist movement. Taksin looked after those in need, and he also restored law and order.

The stress of ruling his country took its toll on Taksin. He turned to religion, and he showed signs of psychological problems.

Taksin believed he would become a Buddha. Monks were whipped and demoted if they didn't worship him.

As the country moved into poverty from the wars, there was widespread corruption among officials. To his credit, Taksin punished the culprits severely. Even so, Taksin was said to be insane, and the voices grew louder to have him removed.

A coup d'etat took place in April 1782, and Taksin succumbed quietly. There are two versions of events when it comes to the fate of Taksin. The first says that on 10th April 1782, Taksin died by beheading. The second version says Taksin was taken away and lived quietly until 1825.

In 1954, the government unveiled a nine-meter statue of Taksin in Thonburi. There is a fair every year to commemorate King Taksin.

Taksin received the title of "the Great" from the Thai government in 1981.