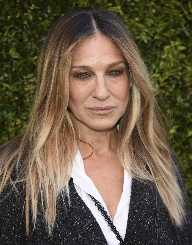 Sarah Jessica Parker is an American actress born on March 25th, 1965. She is best known for her role on Sex and the City as Carrie Bradshaw. In fact, her great efforts to the role earned her a two Emmy Awards and four Golden Globe Awards. She has also acted in other films like Ed Wood, Hocus Pocus, and Failure to Launch.

Growing up, Sarah Jessica Parker took both singing and Ballet classes before moving to New York where she continued her passion for acting. She realized her talent at such a young age and nurtured it. In 200, she was the MTV Movie Awards host. The talented actress also appeared in Glee in its fourth season four alongside Jane Lynch.

Sarah Jessica Parker was born on March 25th, 1965. Her place of birth is in Nelsonville, Ohio in the United States. She is among the eight kids of Stephen Parker and Barbara Parker. Stephen worked as a journalist and entrepreneur while Barbra was a teacher and nursery school operator. Among her siblings are actors Pippin Parker and Timothy Parker. At a young age, her parents divorced, and Paul Forste married her mother. He was an account executive and a truck driver as well.

From a young age, Sarah Jessica Parker took Ballet lessons along with singing classes. Her family later relocated to Cincinnati before settling in near New York City. This is where she would have proper exposure for her passion in acting in singing. The family then relocated sometimes and finally settled once again in Englewood, New Jersey. This is where Parker enrolled at Dwight Morrow High School.

Subsequently, she went to New York City to study in School of American Ballet. She also attended Professional Children's School still in New York. Later, she studied in School for Creative and Performing Arts situated in Cincinnati. While at Los Angeles, she took classes in Hollywood High School.

After Sarah Jessica Parker won her debut role on Broadway in The Innocents, her family relocated to New Jersey. This was a career move since they wanted her to explore more in acting. In the following years, she went on tour with The Sound of Music along with her four siblings.

Her first role in film premiered in 1979 with her role in Rich Kids. Later in 1982, her role in Square Pegs sitcom made her quite famous among Television audiences. She became even more famous for her role in the hit movie Footloose in 1984.

In 1985, she starred in Girls Just Want to Have Fun along with very young Helen Hunt. She also featured in L.A. Story in 1991 and Honeymoon in Vegas the following year. Later in 1996, she acted supporting role in Miami Rhapsody.  In 2016, Parker was the executive producer of the comedy Divorce by HBO. She is also starred in the film.

In 1998, Sarah Jessica Parker was given a starring role in Sex and the City. She became a legend in the fashion world with this role. Parker wasted no time utilizing this new side of her to be a style icon.

In 2003, she became Garnier hair products’ spokesperson. Subsequently, in 2005, she launched Lovely, her first perfume.

She also owns SJP Beauty Company. She sells most of her perfumes through this company. Additionally, Parker launched her line of shoes in 2014. It is called SJP Collection