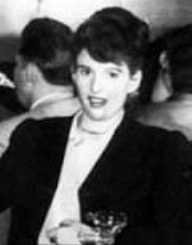 Edie Parker was born Frankie Edith Parker on the 20 September 1922 in Detroit, Michigan into a prosperous family.

After graduating from high school, Edie Parker enrolled at Columbia University, New York to study for an art degree (1941). Initially, she lived with her grandmother in New York City and took night classes.

Staying with her grandmother, Edie Parker met Henri Cru who lived in the neighbourhood. Cru introduced her to Jack Kerouac who was also studying at Columbia University. When Cru went away during World War II, and Parker began dating Kerouac. She found an apartment to share with Joan Vollmer, and after a time, Kerouac joined them. The apartment became legendary as the meeting place of individuals who would later become known as the Beat Movement and included William S. Burroughs and Allen Ginsberg.

When Lucian Carr was accused of the stabbing murder of David Kammerer, Kerouac was implicated and jailed as a witness. Kerouac and Edie Parker got married to access her trust fund interest to pay for his bail. Kerouac was found not guilty of any involvement, and when he was released, he lived at Parker’s family home for a short time before returning to New York City.

The couple shared an apartment in New York, and Parker supported them. After a while, she began to resent supporting his lifestyle and returned home (1946). Their marriage was annulled in 1952. Edie Parker kept in touch with Kerouac until he died in 1969. He used her as inspiration for characters in various books.

After the demise of her marriage to Kerouac, she married twice more. Edie Parker died on the 29 October 1993. Parker left a memoir; You’ll Be Okay: My Life With Jack Kerouac which was published in 2007.