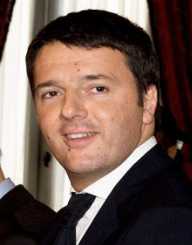 Matteo Renzi was born on January 11, 1975, in Florence, Tuscany. He was the second son of a Christian Democratic councilor and businessman, Tiziano Renzi and his wife, Laura Bovoli. His interest and pursuit of a career in politics began from his school days. He was a student body representative in the prestigious Liceo Classico in Florence. In 1996, he joined the centrist Italian people’s party. He also participated in founding a committee to support a candidate of choice, Romano Prodi as Prime Minister in the year’s general election.

Matteo graduated from the University of Florence with a law degree and later joined his father’s business.

After a series of radical reforms in his tenor as Mayor and increasing popularity, Matteo Renzi's call for "a new government, a new phase and a radical programme of reform’ was heeded and led to the resignation of Prime Minister Enrico Letta on the 22nd of February 2014. Matteo Renzi quickly received a mandate from President Napolitano to implement proposed reforms. Renzi on the 22nd of February 2014 became the youngest Prime Minister of Italy. He was thirty-nine years old at the time.

He was prime minister until the 12th of December 2016 after he resigned due to No-vote on the constitutional referendum tendered by him.

When he became prime minister, Matteo Renzi went down in history as the youngest person to ever rise to the position of Prime Minister in Italy. His cabinet also consisted of the youngest members of any cabinet in the history of Italy. It was also the first time the female members were the same number as the male members including the Prime Minister.

He agitated for comprehensive reforms in government right from the time he began as Mayor.

His reformative mindset and agendas earned him the nickname “il Rottamatore," which means "The Scrapper.”

As Prime Minister, Matteo Renzi proposed and took several reformative steps. He forced chief executives of top state-owned companies to resign and appointed many women in their place. This was a unique action in Italy.

He caused several luxury cars used by heads of state to be auctioned off.

Matteo Renzi proposed the Jobs Act signed into law on the 3rd of December 2014 to give the long overdue reform in the labor market. On 13th June the same year, the guidelines for the reformation of the Public Administration presented by him was approved.

He combated the migrant crisis in his time with a law decree that allowed international protection of the migrants.

Matteo Renzi formed close relationships with the leaders of several countries, like the United States and within Asia, Africa, the Middle East and Latin America to combat world security and economic issues. He also decried the invasion of East Ukraine and supported the G8 sanction against Russia and President Putin.

Matteo Renzi enjoyed record high ratings and immense support in the early part of his career. This popularity began to decline over time, especially during his premiership. Most of the adverse response to him came from his radical reformative ideals. While he was Mayor, he suggested that Italian politicians of the same generation as the then Prime Minister Silvio Berlusconi should retire. This was heavily criticized.

In his cry for "a new government, a new phase and a radical programme of reform’ he forced out Prime Minister Enrico Letta. This seemed like a bold-faced backstabbing as the Prime minister had applauded his progress in politics. Moreover, Matteo Renzi himself had assured Letta amidst rumors that he had no intentions of plotting against him.

The new electoral law that transformed the Senate into a federal upper chamber caused him to be referred to by many as authoritarian and anti-democratic. He forcibly pushed a school reform to be approved despite overwhelming unpopularity among students and teachers. Pope Francis condemned a universal exposition organized and hosted in Milan during his tenure for having indulged in too much waste.

Matteo Renzi's popularity dipped until his resignation on December 12th 2,016 following a constitutional referendum proposed by him being cripplingly voted against.

The ambitious politician Matteo Renzi got married to his wife Agnese Landini, a school teacher in 1999. They have three children together, Esther, Emmanuele and Francesco.

Apart from being a politician, Matteo Renzi is a devout Catholic and an active member of the Association of Italian Catholic Guides and Scout. He is an avid supporter of Fiorentina, the football team of his hometown, Florence. He also owns a football team the ‘Florence Angels’.

The 42 year old politician has also made a fortune from stock investments, property holdings, endorsement deals, a chain of restaurants, amongst other business interests. His wealth is estimated at $245 million.

After his recent defeat, Matteo Renzi has voiced in his own words "My experience of government finishes here."