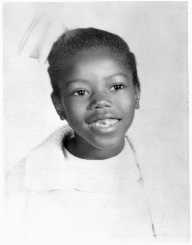 Ruby Bridges was six years old when she became the very first African-American child to attend a white Southern school. She had to be escorted to her class by U.S. Marshals. This symbolic act of bravery helped cement the civil rights movement in the USA.

Bridges was born to Abon and Lucille Bridges. Abon and Lucille both worked as Sharecroppers in the town of Tylertown, Mississippi. Ruby Bridge's early years were spent on the farm her parents and grandparents worked on. When she was four years old, her parents decided to move to New Orleans in search of a better life. Abon, her father, got a job as a gas station attendant and mother took night work. In time, Bridges had three younger siblings, two brothers, and a sister. An interesting fact is that Bridges was born in 1954, the same year as the Supreme Court’s Brown vs. Board of Education decision which outlawed segregation. As a kindergarten child, Ruby Bridges, along with other African-American students in New Orleans, had to take a test to see whether or not she would be able to attend a whites school. It was said that the test was deliberately made difficult to ensure that many students would not pass. The implication being that if these small children failed the test, the schools would remain segregated.

Ruby’s father was not in favor of the test because he was concerned that if his little girl went to an all-white school, it would cause serious problems for his child. Lucille, Ruby Bridges’s mother, was adamant though. She was of the firm belief that her daughter would be better educated at a whites only school. Eventually,  Bridges’s parents agreed, and Ando allowed Ruby to do the test. In 1960, Ruby Bridges passed the test. Her parents were told that she was one of only six African-American children to have done so.

The school Ruby was to attend was the William Frantz School, close to her home. This was a momentous occasion. Ruby Bridges would be the first black child to attend an all-white elementary school in the South. The Louisiana State Legislature kept finding loopholes in the law, and this slowed down the entire process. Finally, though, they ran out of loopholes, and the planned integration was set to go ahead.

A Federal District Judge arranged for the US government to send Federal Marshals to New Orleans to ensure the safety of the children during the initial integration process. So on the 14 November 1960, Federal Marshals drove Ruby and her mother Lucille five blocks to Lucille’s new school. Two Marshals walked in front of the six year old and two behind.

Norman Rockwell painted The Problem We Must All Live With in response to a photograph of Ruby Bridges walking between the Federal Marshals becoming etched in his memory. There were ugly scenes when Ruby and the Federal Marshals arrived. Many white pupils had been kept at home. Ruby Bridges was ostracized at school. One teacher, Barbara Henry, also a newcomer to the school, agreed to teach Ruby. This teacher made the child’s life bearable by showing consideration and kindness.


Fall-Out For The Bridges Family

Ruby Bridges and her family all suffered. Her father lost his job. Her grandparents lost their sharecropping jobs and were kicked off the farm they lived on. Some of the local shops refused to serve them. On the other hand, other community members, both black and white, helped. Children were sent back to school. Someone helped Ruby Bridges’s dad find another job; others helped out in other ways.

Around this time, Bridges started showing signs of psychological stress, and it was arranged that she would see Dr. Robert Coles, a child psychologist. Coles and his wife, also a medical professional, both helped Ruby by volunteering their services. Cole later wrote a book about Ruby and her experience.

After that first difficult year, most of the white children returned to the school, and Ruby even socialized with them some of them. During  Bridges’s second year, the Federal Marshals were no longer around and her favorite teacher, Mrs. Henry had returned to Boston with her husband. Ruby walked to school by herself. Ruby Bridges settled down to school life, and the racism seemed a thing of the past.

After finishing grade school, Bridges attended and graduated from the integrated Francis T Nicholls High School in New Orleans. She then went to the Kansas City Business School where she studied tourism and travel.

After completing her time at Kansas City Business School, Bridges got a job as a travel agent with American Express. In 1984, she married Malcolm Hall. Bridges and Malcolm had four sons together. When the boys came along, Ruby chose to become a homemaker. Bridges' youngest brother Malcolm was murdered in 1993. Bridges helped to care for Malcolm's four children who coincidentally attended the William Frantz School. Bridges volunteered at her old school and eventually became involved in parent community liaison. Bridges became passionate about the role of parents involvement in the education of their children.

Bridges used the experience of meeting people such as Oprah Winfrey to bring awareness to the need for getting parents actively involved in their children's education. In 1999  Bridges formed the Ruby Bridges Foundation. The stated aim of the foundation is to promote racial harmony through tolerance, respect and the appreciation of all differences.