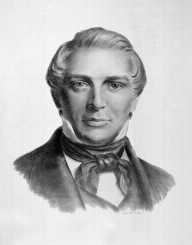 Joseph Smith Jr. came to prominence as the founder of the Church of Christ or Mormonism. According to him, he was directed by an angel called Moroni to unbury a golden plate book that he came to name it as the Book of Mormon. He was known as the real Prophet by his followers as he fully believed in biblical guidance and ‘God’s’ wisdom. Lots of his Christian collections were named as the Pearl of Great Price and Doctrine and Covenants. His church was always filled with Christians from all walks of life, but this didn’t make the newspapers not to post and tag his religious themes. People were left with unanswered questions and in the end; their patience bored a fruit when Joseph’s character was revealed in public. Read further to know how his life turned out.

On 23 December 1805 Joseph Smith Jr was first seen in the world in Sharon, Vermont, in the U.S. His biological parents were named as Lucy Mack Smith and Joseph Smith Sr. His father worked hard as a promising merchant and farmer. When Joseph Jr. was seven years of age, he was diagnosed with typhoid fever that made him walk on crutches for over two years. As a result, he used to limp a little bit due to his early symptoms of the fever.

Besides, his family suffered from financial instability when they were forced to look for greener pastures elsewhere. It was here that Joseph Sr. opted to take his family to Palmyra, NY in 1817. Joseph started to go to church as well as reading the bible at the age of 12. He loved to join church activities and afternoon classes. Just like his great-grandparents who believed in superstitions, Joseph Smith Jr didn’t argue with them. Instead, he came to embrace the reality where he knew that ‘God’ talked to him through visions and dreams.

Early in 1820, Joseph Smith Jr's life changed when he announced that he had a clear vision while he was praying in the woods. He announced that his ‘God’ assured him that he was not pure, but his sins were forgiven. Also, he heard a voice from above that claimed that he shouldn’t join anyone’s church but his. He tried to make his vision clear to the unknown, but his trials were fruitless. It was at this time that he defined it as his very First Vision according to Mormonism.

In 1823 Joseph translated a book that he regarded as a gift from above since an angel called Moroni showed him the path. In 1827 he went to Harmony together with his wife, Emma. His wealthy friend, Harris helped him to transcribe his writings. Harris took his writings to show his family members, but he lost it on the way.

The irony came when his first born and newborn son breathed his last the same day. Along with that, Joseph Smith Jr's translation talent lost in the middle of nowhere. According to him an angel that he called Moroni took everything from him because he misplaced the very first book that he unburied at Cumorah Hill.

There is no actual evidence how Joseph Smith Jr got the book, but he came to publish it in 1830.The book mentions a chapter about a historical church and introduction of baptism. It was here that Smith founded The Church of Jesus Christ of Latter-Day Saints the same year. The church gave birth to other branches in Palmyra, Fayette, and Colesville.

Lots of people joined in as members where they were first baptized and named as Mormons. On the other side, Joseph faced wrath on several Media and mobs to the point of spending some time behind bars. To let go of further controversies, Smith went to live in Colesville.

Joseph Smith as the Prophet of God

Over a thousand followers in other Christian churches joined Smith’s church as Mormons including Sidney Rigdon. He was later appointed as the assistant leader of Joseph Jr. In the mid of 1833, the non-Mormons tried to evacuate the Mormons that planned to take over Ohio. It was there that he opted to change the name of his church to Church of Latter Day Saints. In the process, he created his team called Zion’s Camp that helped him to get rid of the non-Mormons in Missouri. In 1837 Joseph Smith Jr was arrested for fraud.

After a year, Smith went to hide in Missouri together with Rigdon. It was here that he named his church as the Church of Jesus Christ Day Saints. A new temple followed, and within a few months, more members joined the congregation. Other members including Oliver Cowdery and David Whitmer were eliminated from the church. They were considered as intruders.

The Battle of Crooked River

In the mid of 1838, the non-Mormons didn’t authorize the Mormons to vote during the Gallatin County Election Day Battle. The election was planned to proceed in Gallatin, but that didn’t happen due to rising of raids from the Mormons. The non-Mormons made sure that Smith’s followers owned nothing at the end of the day. At a distance, this is what gave birth to the Battle of Crooked River. In the process, Governor Lilburn Boggs instructed his office to expel the Mormons from his land.

In the mid of October 1838, seventeen Mormons called it quit the world. As a result, the long fights led to the formation of Haun’s Mill massacre. It was during this period that Joseph Smith was sentenced to thorough punishment in prison in Liberty, Missouri. He spent one month in jail where he luckily escaped custody.

After his release in prison, Joseph Smith Jr purchased a sizable land in Illinois where he went to live with his followers and family. He named the place as Nauvoo- to be beautiful. The following year, he traveled to Washington, D.C to seek relief from prominent leaders without success.

In the mid of 1844, Joseph Smith Jr announced his candidacy for the President of the United States position with his independent party. It was during the same year that some of his male fellows announced that he was proposing forceful marriage to their wives. Smith opted to expel some of his followers where they went to launch their church. This led to another controversy.

In 1827 Joseph Smith married Emma Hale. The couple was blessed with nine children and two adopted ones. In 1844 he and his brother were charged with treason and riots. A multitude of non-Mormons killed both. Smith was shot like a thousand times where he fell out of the nearby window and knocked the heavens door. In his honor Mormons took the time to build a granite pillar in Utah.

Joseph Smith Jr was later ranked as 100 Most Significant Americans of All Time by the Smithsonian Magazine. Biographers, non-Mormons, and Mormons later released several of his works. The works covered different topics including being a man of God, a myth-creator, a suspicious fraud among others.