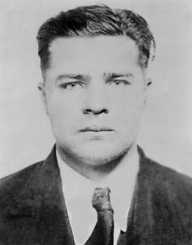 Charles Arthur Floyd was born on February 3, 1904, in Bartow County of Georgia. At the age of seven, the family moved to Akins, Oklahoma, where he grew. He also spent some of his early youthful years in Missouri, Arkansas, and Kansas.

Pretty Boy Floyd worked as a farmer until poverty eventually sent him into crime. His first known arrest was at age 18 when he stole $3.50 from a local post office. On September 16, 1925, police arrested him again in St. Louis, Missouri for a payroll robbery. Following his trial, he had a five-year prison term. However, he earned parole after serving three and a half years.

After that parole, Floyd became even more hardened and took his crime to another level. He joined forces with other criminals in Kansas City and committed several crimes. He earned the nickname, “Pretty Boy” during this period.

In the early months of 1929, Floyd faced several arrests for different crimes but subsequently left off the hook without charges. On May 8 that same year, Pueblo, Colorado officers arrested and charged him with vagrancy. Consequently, he received 60 days in prison sentence with a $50 fine.

Subsequent arrest and charges followed including for bank robberies and murder. Pretty Boy received 12–15 years sentenced in Ohio State prison for his involvement in the Sylvania Ohio Bank robbery in 1930. However, he successfully escaped from jail. He fatally shot federal agent Curtis C. Burke in Kansas City, Missouri on July 22, 1931.

Floyd became known for destroying mortgage documents after bank robberies. As a result, the locals in Oklahoma gave him protection and nicknamed him "Robin Hood of the Cookson Hills."

On June 17, 1933, some security officials died in a gun battle in an incident that became known as the Kansas City massacre. Officers who died in the incident included  Detective William Grooms, Patrolman Grant Schroder, and Police Chief Otto Reed. FBI special agent Ray Caffrey also died in the incident. Following that heinous crime, Floyd and Adam Richetti became the main suspects. However, Floyd unequivocally denied his involvement in the massacre.

The death of the security officers made Floyd a target of the FBI and other security agencies. He became Public Enemy No.1. On October 22, 1934, security agents including local officers and FBI agents led by Mervin Purvis fatally shot Pretty Boy Floyd in a cornfield in Beaver Creek State Park in East Liverpool, Ohio. Some accounts state that the shot initially fired at Floyd only injured him. However, after refusing to answer questions, a federal agent fatally shot him.

After Floyd’s death, officers embed his body for public viewing. Subsequently, placed on public view in Sallisaw, Oklahoma dozens of people trooped in to catch a glimpse. Despite being a criminal, more than 20,000 people attended Floyd’s funeral. Up to date, the gathering is the largest funeral in Oklahoma history.

Several works including films, music, and literature has portrayed Pretty Boy Floyd's life story. In the 1959 film The FBI Story, Bob Peterson played Floyd. Films about the life of Floyd include Pretty Boy Floyd, 1960, Dillinger, 1965, and A Bullet for Pretty Boy in 1970. Others include The Kansas City Massacre, 1975, and Public Enemy in 2009. He has also been featured in video games.