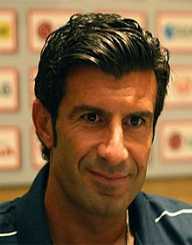 Luis Filipe Madeira Caeiro Figo was born on November 4, 1972. He was the only child of his parents Antonio Caeiro and Maria Joana. Figo grew up in Piedade, Almada. From an early age, he was interested in football. Figo started to play street football for U.F.C. pastillas. When he was 11 years old, Figo joined the academy of Sporting Clube de Portugal.

Figo made his league debut in 1990 as a substitute player. The following year, he won his senior international cap. His final season for the Sporting CP was in 1994-95 season when the club won the Portuguese Cup.

Figo began his professional career with some controversy. He was signed by Italian clubs Juventus and Parma, which resulted in an Italian two-year transfer ban on him. He moved to the Spanish club Barcelona but had to pay a £2.25 fee. At the time, Portuguese players were prohibited from signing to foreign clubs outside a fixed period. Despite the troubles, Figo began playing for Barcelona. His 1996-97 season marked the beginning of his success when the club won the UEFA Cup Winner’s Cup. During this season, he appeared 172 times and scored 30 goals.

A major change in Figo’s career happened in the year 2000 when Figo made a move from Barcelona FC to their rivals Real Madrid. His contract had a buy out clause, and Real Madrid met the fee- $60.1 million. The fee was a world record and marked the beginning of the “Galactico era”- the club began to sign global stars every year. After the move, many of his fans turned against him. In 2000, he appeared as Real Madrid player at the Camp Nou game against Barcelona. The noise made by fans was threatening, and there were banners around the stadium calling Figo traitor. During the game, 98,000 Barcelona fans made a lot of noise and threw objects on the field. Real Madrid ended up losing the match, which was an unpleasant experience for Figo and his team.

The following year, Figo won the La Liga title and received the FIFA World Player of the Year award. In the 2001-02 season, Real Madrid won the UEFA Champions League title. His second comeback to Camp Nou was not much different than the last. Figo was forced to remove all the thrown items from his way be able to play. At one point, the game had to be suspended because of objects flying in his direction. Figo played for Madrid for five seasons.

In 2005, Figo joined the Italian club Internazionale, when his contract with Real Madrid expired. As a free agent, Figo was finally able to join Italian club, which he was denied at the beginning of his career. Figo announced his retirement from football in 2009. During his career, Figo also played in the 1991, 2002 and 2002 FIFA World Cup. He was also part of Portugal’s national team in several Euro Cups.

Later in his career, when his speed and mobility decreased, Figo was known as the attacking midfielder. He was also known for his leadership skills throughout his career. Figo has been featured in commercials for Nike and also features in EA Sports’ FIFA video game.

Figo is currently living in Sweden, with his wife, Swedish model Helena Syedin. The couple has three daughters.
Figo is the ambassador for the organization Stop TB Partnership, which fights against tuberculosis. He is still working with his former club Internazionale as the ambassador for its functions. He is the founder of Network90- a private networking site for the professional football industry.